Avrupa Minerals Ltd. (AVU:TSXV) is pleased to provide assay results for drill hole SES003 which was drilled on the Alvalade Project in 2014, but not analyzed until now due to its general proximity and similar visible characteristics to drill hole SES002.  The SES003 assays were completed now in order to be added into Avrupa’s 3D model of the “2” Lens.  Hole SES002 is the Sesmarias “2” Lens discovery hole, and its assay results are also shown below.  SES003 added approximately 18 meters of dip length to the “2” Lens, as calculated in 2014.  Results from SES003 are comparable to those from SES002, as shown in the tables below.

To date, Avrupa has drilled seven closely-spaced, shallow core holes in the area of SES002 and SES003 to determine possible extent of the “2” Lens. Avrupa also conducted several types of downhole and surface geophysical surveys.  Intercepts of broken massive sulfide mineralization in SES005, SES006, and SES007, along with results from the geophysical work, and review of the actual core material in all of the holes suggested that mineralization comprising the “2” Lens occurred in a fault zone (now understood as the eastern boundary fault described in recent news releases of February 11, 2019 and March 11, 2019).  The interpretations from the 2014 drilling program suggested that the possible extents of the “2” Lens were on the order of 100-125 meters dip x 50-75 meters strike, and 5-10 meters thickness, as demonstrated in the following cross section and map view of the mineralization. 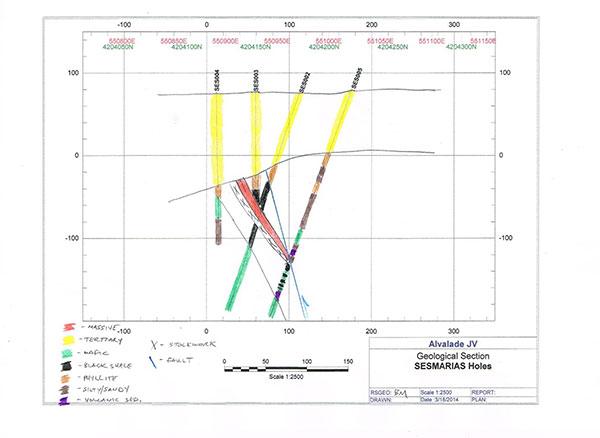 Figure 1.  Simplified interpretive section through SES002/003/004/005.  From this interpretation, the massive sulfide horizon strikes northwest, and dips moderately to steeply towards the northeast. Prepared by B. MacFarlane, 2014 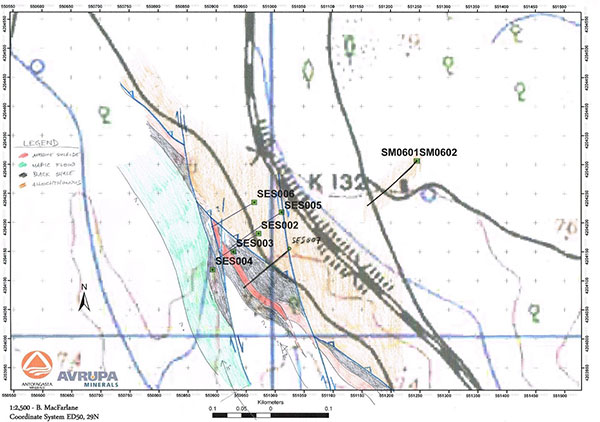 Figure 2.  Interpretive geologic map above the Sesmarias fence of drillholes.  This sub-Tertiary interpretation utilized drillhole data, as well as MALM and DHEM geophysics to produce the map.  Prepared by B. MacFarlane, 2014

Work completed during the recent 2018 drilling program, including re-logging of the historic holes, sampling of SES003, drilling of SES030 which encountered the fault zone where sulfide mineralization was anticipated, and a full, computer-driven re-model of all data by project geologist J. Coder suggested similar, slightly enlarged parameters for the “2” Lens.