Avrupa Minerals Ltd. (AVU:TSXV) is pleased to report on drilling results at its 100%-owned Sesmarias Prospect, located on the Alvalade license in the Pyrite Belt of south Portugal.  This program explored new sectors of the Sesmarias Prospect and confirmed a new exploration and mineralization model for the District.  The Company completed six holes totaling 2,498 meters and reported on successful progress in an earlier news release, dated February 11, 2019.

Highlights from the program include the following results:

Paul W. Kuhn, President and CEO of Avrupa Minerals, said, “Avrupa Minerals is excited about the continued positive results of the drilling on the “10” Lens.  We have substantially increased the size and volume of known massive sulfide mineralization, as well as intercepted continued base and precious metal mineralization.  With only seven holes into the lens itself, six of which intercepted between 15 and 58 meters of massive sulfides, we see plenty of further potential to upgrade the known prospect at Sesmarias.  Discovery of the stockwork system in SES028 further supports that the Sesmarias system is a robust mineralizing event.  We look forward to our next phase of the program.”

SES026 intercepted 28.95 meters of massive sulfide mineralization grading 0.48% copper and 0.77 g/t gold, extending the “10” massive sulfide lens to at least 600 meters in strike length.  The top seven meters of the intercept contained higher grade silver, copper, lead, and zinc, followed by a nine-meter interval of 1.09 g/t gold, as shown in the table below. The hole was collared on a geophysical anomaly which extends a further 150 meters beyond the SES026 location.  At this time, the estimated average dimensions of the 10 Lens are 600 meters long x 300 meters wide x 25 meters thick.  The mineralization is open to the east boundary fault and to the west intersection of the Devonian host rocks and the Tertiary gravels.  The lens appears to be cut by post-mineral dikes to the north and remains open to the south, though faulting may truncate the lens about 100 meters south of SES021.

Mineralization in SES026 showed significantly higher gold values compared to previous drilling on the 10 Lens, as shown below, as well as slightly higher overall copper values.

The following figures demonstrate the robustness and increased size of the “10” Lens at Sesmarias.  Note the open areas to the north of the known massive sulfide locations.  The Sesmarias Prospect area continues for a further 1000 meters to the north of the area of the present phase of drilling. 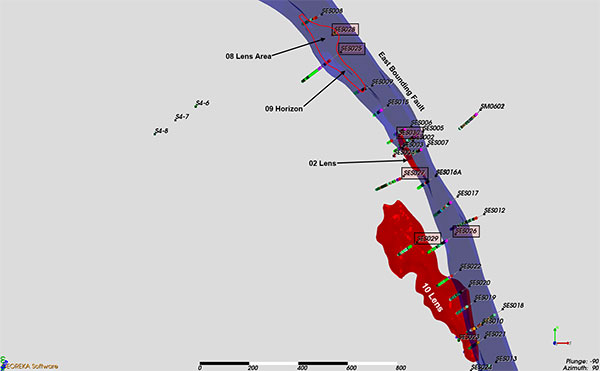 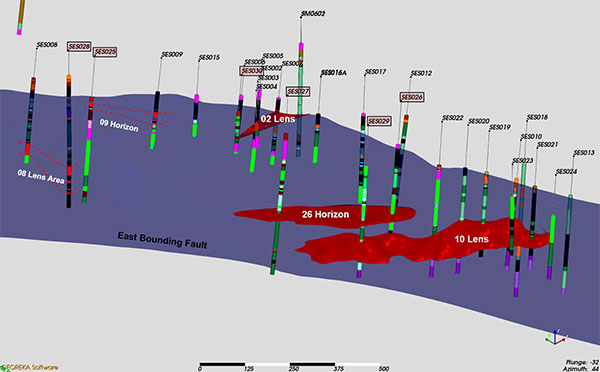 Figure 2.  Long section view (looking to the east) of the “2” Lens, “26” Horizon and “10” Lens (in red). Note the large, unexplored area to the left of the 26 Horizon and the 10 Lens. The “8” Lens Area and “9” Horizon are marked with dashed red lines. The Eastern Bounding Fault is the darker blue background. The recently drilled holes are highlighted with a transparent box.

SES028 hit 87.40 meters of stockwork quartz-iron sulfide veining that marks the possible edge of a feeder zone for the, previously-discovered “8” Lens.  Assays indicated anomalous gold, silver, copper, lead, and zinc throughout the entire length of the stockwork from 373.40 meters to 460.80 meters in depth, beneath the 8 Lens. Examples of variable intervals of anomalism include:

SES026, SES027, and SES029 intersected a horizon of stockwork quartz-sulfide veining located 20-40 meters above the “10” lens (see Figure 2).  While mostly iron sulfides, the location of the horizon suggests potential for another possible mineral layer in the Sesmarias massive sulfide system.