Avrupa Minerals Ltd. (AVU:TSXV) is pleased to present the initial progress report covering drilling at the Sesmarias Prospect in the Alvalade Project (Alentejo, Portugal).  The program is a joint venture between Avrupa Minerals and Minas de Aguas Teñidas, S.A. (MATSA) and is operated by Avrupa through the JV entity PorMining Lda.  To date, the Company has completed two diamond drill holes, totaling 874 meters, and has started a third hole testing northern extensions of the Sesmarias copper-zinc-iron sulfide mineralization.

Paul W. Kuhn, President and CEO of Avrupa Minerals, commented, “We are excited about the immediate possibilities in the Sesmarias target area.  Positive geochemical and geological results from SES20-031 indicate potential for a continuing strong VMS system.  We are still in the early stages of work at the north end of the presently-known Sesmarias system.  Already, with the completion of two drill holes, and the start of a third hole, we have a much-improved understanding of the structural controls to the massive sulfide mineralization.  This allows us to better target the massive sulfide bodies, as we move north along strike, and at some depth targeting downdip mineralization.  The geological team has done a great job in pushing the Project ahead.” 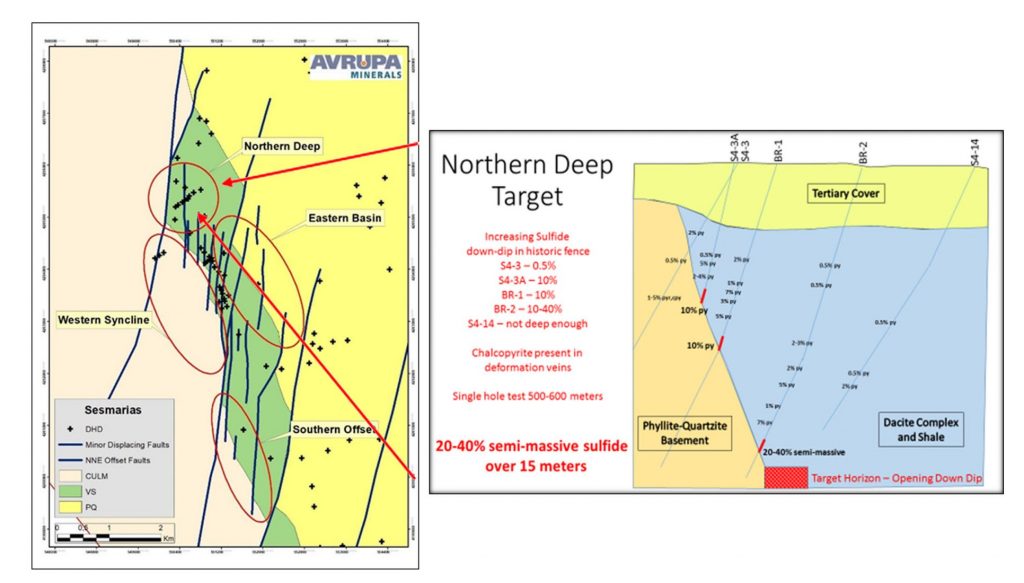 Figures 1 and 2.  Location of Northern Deep (Brejo area) and original targeting idea.  Review and re-interpretation of historic work and new drilling have demonstrated significant new potential in the area between SES008 and the “Northern Deep” (Brejo) target shown above. 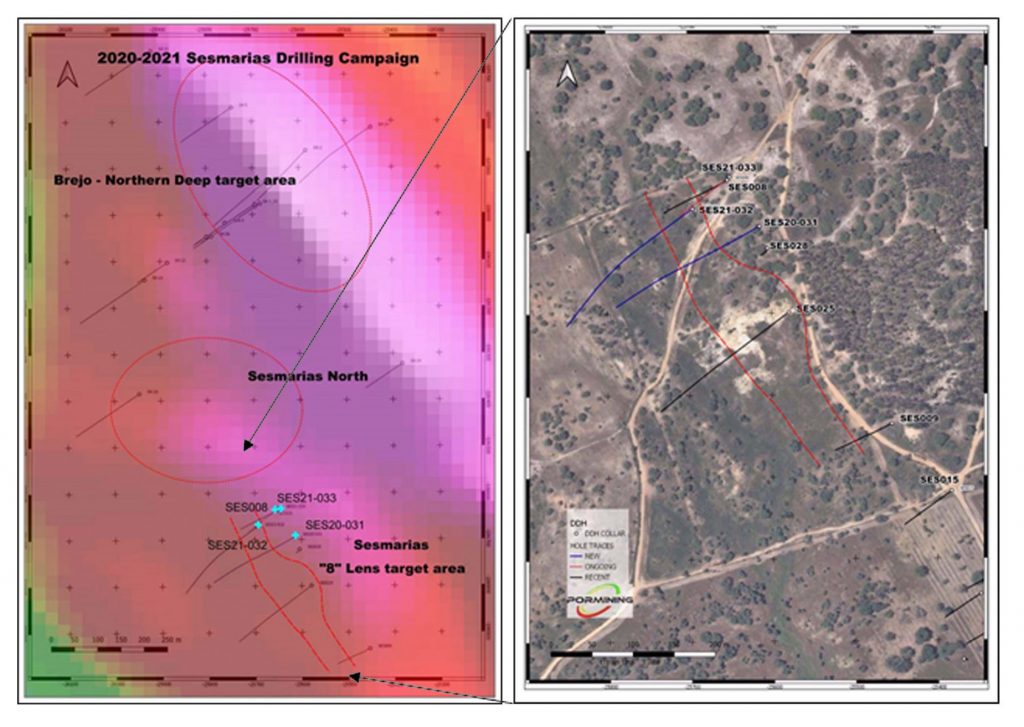 Figure 3.  Plan view map of the present drilling area and targets, overlain on top of gravity geophysical information.  Sesmarias mineralization is located on the southwest flank of a gravity anomaly only recently explored by Avrupa Minerals and partners.  The next obvious target is the strong gravity anomaly in the upper half of the figure.  The Brejo (Northern Deep) anomaly is illustrated in Figure 2.  We plan to test this target in the near future.
Figure 4.  Google Earth enlargement of the Sesmarias “8” Lens target area (outlined in red dashed lines, open to NW/SE and downdip at depth).

SES20-031 targeted potential massive sulfide mineralization related to the SES008 intercept (https://avrupaminerals.com/project/alvalade/).  The hole continued to 536 meters depth, in several places intersecting the specific black shale unit that hosts massive sulfide mineralization at Sesmarias and at the Lousal Mine, located six kilometers to the north.  Detailed review of the core showed that for its entire length, the drill hole passed through intensely folded rock units of the Volcano-Sedimentary Formation, the general host of mineralization throughout the Iberian Pyrite Belt.  Overall, however, the drillhole roughly paralleled the major trend of bedding, allowing only for narrow true widths of mineralized intercepts. 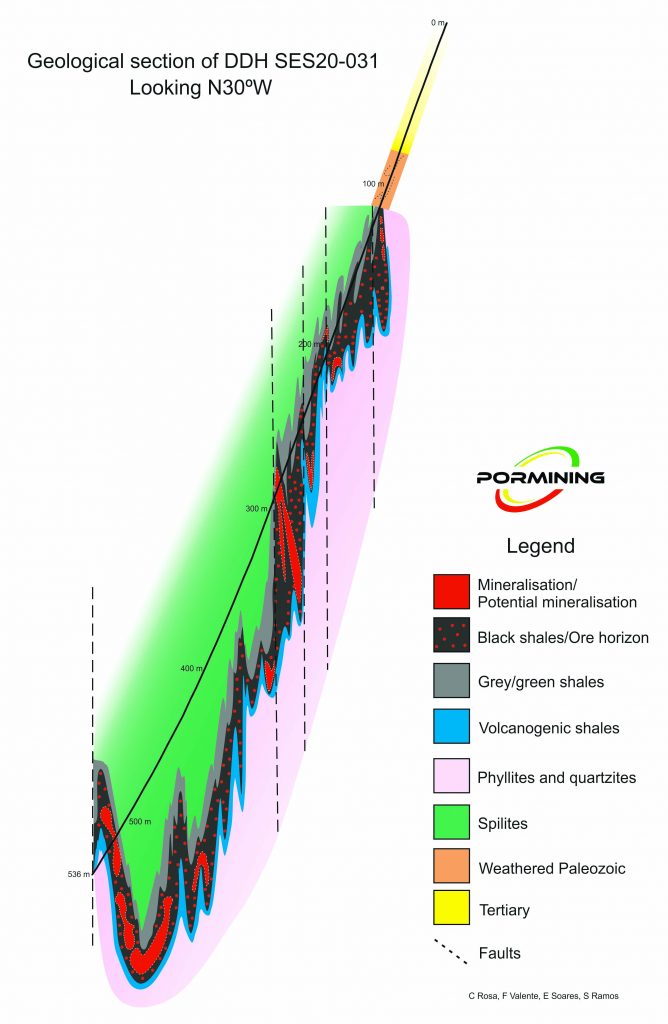 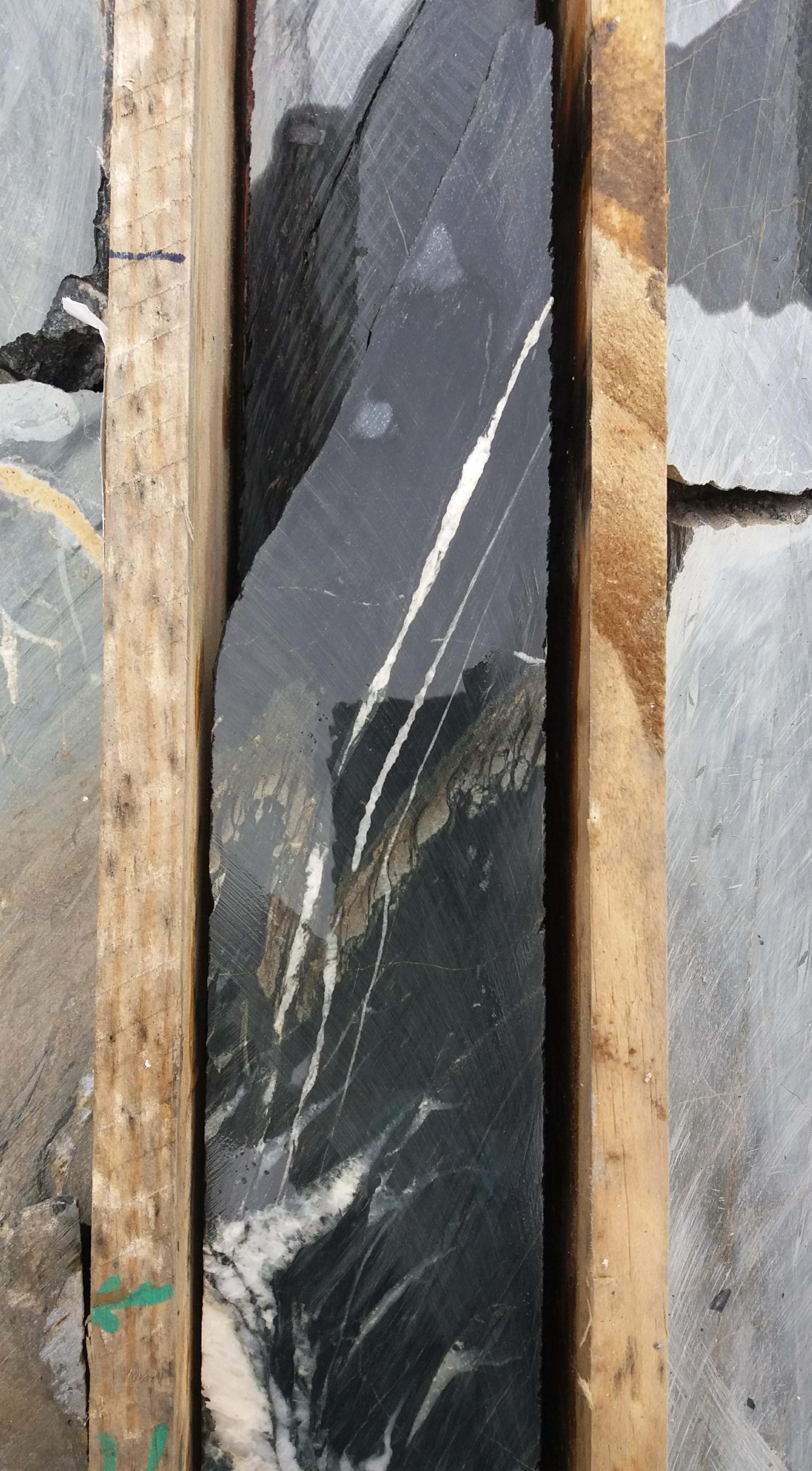 Figure 5.  Geological section of SES20-031.  Target rocks are noted in red (massive sulfide mineralization) and black (mineral host black shale unit).  Previous work by Avrupa suggested that individual massive sulfide lenses were oriented ± vertically, but often dipping steeply to the NE.  However, detailed re-logging of Sesmarias area core and subsequent first-logging of SES20-031 lead to the conclusion that intense folding of the limb of a much larger, overall westerly-dipping fold system is a realistic reason as to why drilling has not yet cut significant thicknesses of massive sulfide – i.e., the drilling roughly parallels the target host unit and never really crosses mineralization at a favorable angle.
Figure 6 is a photograph of a piece of core from SES20-031 (about 20 cm in length).  This shows, in miniature, how intensely folded the rocks are in the Sesmarias District, as it directly mimics the larger-scale folding seen in the Sesmarias drill holes.  We now see this pattern throughout the entire length of the known mineralization.  Design of subsequent follow-up drilling will attempt to take into account the better understanding of the structural complexity of the massive sulfide target.

Figure 5 demonstrates the partial success of the drilling, but also shows that the drillhole skirted or skimmed the main target zone, for the length of the hole.  The thickest intercept occurs at 277.70 to 288.45 meters, where drilling skimmed the top of a possible folded/faulted massive sulfide lens.  Rocks in the intercept zone are dominantly silica, containing disseminated sulfides, zones of banded sulfide mineralization, sulfide breccias, and one interval of approximately 0.5 meters of massive sulfide material.  The intercept includes a 3.8-meter thick, weakly mineralized fault zone.  The following table shows the metals’ values of the intercept.

Following the completion of SES20-031, we performed a downhole electromagnetic (DEM) survey which produced a strong conductive response in the rocks located above the path of the drill hole.  Using this information, we targeted the second hole in the “8” Lens zone directly at the conductor.  SES21-032 continued to a depth of 338 meters.  At 201 to 211 meters, the drill hole passed through the Sesmarias mineral horizon, a zone of weakly pyritic, quartz vein-rich, broken, graphitic gray and black shales which we interpret to be the DEM conductor, and likely to represent a distal zone of potential massive sulfide mineralization in the “8” Lens area.  We are now detail-logging the drill hole and sampling the shale zone.  The pattern of intense folding and faulting continues in this hole, but it appears that we intersected shale units originally located further away from the main part of the target unit shown in Fig. 5. 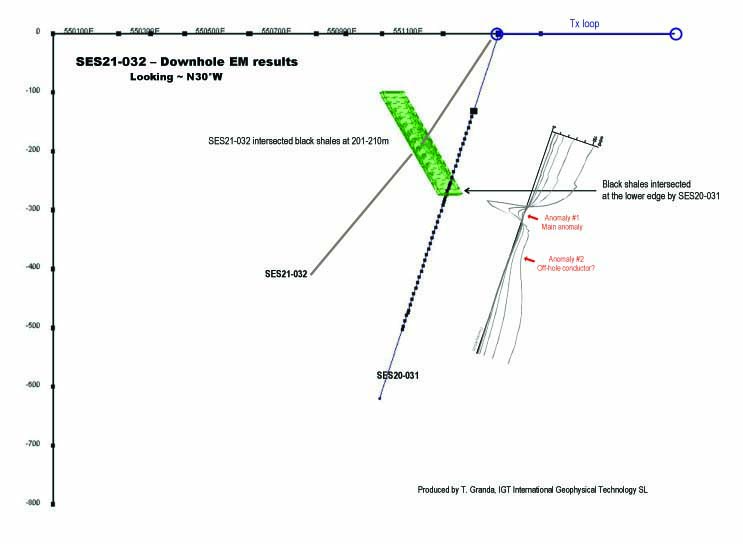 Figure 7.  Schematic interpretation of geophysical information obtained in SES20-031 DEM survey.  Target, in green, tested by SES21-032, represents the Sesmarias mineral horizon in this sketch.  Geological information suggests that mineralization may lie below the trace of SES20-031.  The current drill hole, SES21-033, is testing this target below the previously reported massive sulfide mineralization in SES008.

SES21-033 is designed to target potential downdip massive sulfide mineralization beneath SES008 and SES20-031.  Further information concerning this hole will be provided upon completion, presently planned for 500 to 600 meters depth.

Following the completion of SES21-033, we intend to move to the northwest of SES008 to potentially increase the strike length of the 8 Lens.  At the same time, the geological team continues to assess the historical core in the Brejo area, and has started to map geological structures visible in the old Lousal Mine workings.  Initial work there clearly shows similarity of ore control characteristics to what we now know about the Sesmarias massive sulfide mineralization.  Historical documents and academic studies (non- compliant to NI 43-101 standards) indicate a universal metal resource at the old mine of over 50 million tonnes of massive sulfide material.  Review of original mine records by Avrupa demonstrates that less than 20 million tonnes of ore were actually extracted from Lousal.