Avrupa Minerals continues to drill at Sesmarias and provides update on drill targeting in other sectors of the Alvalade copper-zinc license, Iberian Pyrite Belt, Portugal

Avrupa Minerals Ltd. (TSXV:AVU) (OTC:AVPMF) (FSE:8AM) is pleased to provide the following update for the ongoing project work at the Alvalade JV in the Pyrite Belt of south Portugal.  The program is a joint venture between Avrupa Minerals and Minas de Aguas Teñidas, S.A. (MATSA) and is operated by Avrupa through the JV entity PorMining Lda.  To date, the Company has completed 10 diamond drill holes totaling 5,271.7 meters.  New results from four of the holes, SES21-037 through SES21-040 are pending, and are expected over the next few weeks.

Paul W. Kuhn, President and CEO of Avrupa Minerals, commented, “We have been extremely busy with many facets of exploration on the Alvalade license.  Drilling at Sesmarias is the main priority, right now, but we are also preparing to drill strong targets in other locations around the license.  Earlier in the year, we performed a regional VTEM geophysical survey over 80% of the license, and developed a whole new set of targets in addition to those previously generated by earlier Avrupa work.  As the targets are verified and brought to drill-ready status, we expect that there will be more than enough to request a second rig to drill outside of the Sesmarias area.”

The Company commissioned a helicopter-supported VTEM geophysical survey over a portion of the Alvalade license earlier in the year.  Initial results highlight a trend of potential targets from the Caveira Mine to the Lousal Mine.  Widescale cultural interference in the survey area, caused by a village, railroad tracks, and power lines, made visualization of electromagnetic anomalism particularly difficult in the area between Lousal and Sesmarias.  However, the Company has engaged a second geophysical consulting firm to re-process the original data in order to clarify and accentuate the VTEM anomalism by masking the cultural electromagnetic effects on the survey.  We expect that information in the next few weeks, around the end of August.

First-pass, ground follow-up suggests that the anomalism follows the main mineral trend on the Alvalade license, and that the anomalism is hosted by the same (or similar) volcano-sedimentary sequence (VS) rocks that host mineralization at Sesmarias, Lousal, and Monte da Bela Vista.  The follow-up work for the next few months will include mapping, rock chip sampling and grid soil sampling over the initial target areas, followed by work in the enhanced target areas presently being developed through the data re-processing procedures.  We anticipate this work to be followed by scout drilling with a second drill rig. 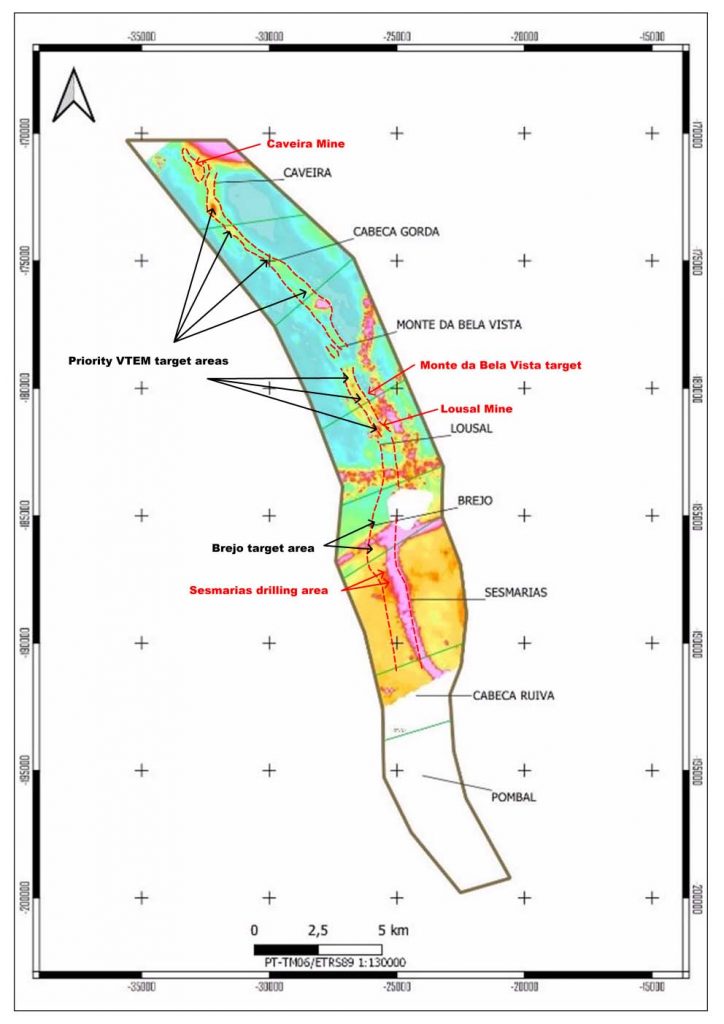 Figure 3.  General map of VTEM anomalism, highlighted in dashed red lines.  VTEM processing generally defined a number of individual target areas within the main trend.  The second round of data processing is expected to enhance the obvious targets and potentially highlight new targets.  The strong north-south linear coloration is caused by railroad tracks, while the east-west linears are caused by either tracks or powerlines.  The blank polygon in the center is a village, and the general yellow color at the south end of the survey represents cover of Tertiary gravels over the target horizons.  The Cabeça Ruiva and Pombal sectors, in the south, will be flown at a later date.

Minas de Aguas Teñidas, S.A. (MATSA) is a private Spanish mining company, which owns and operates three mines in the province of Huelva (Andalusia, Spain):  Aguas Teñidas, Magdalena, and Sotiel.  MATSA also holds 1,312 km2 of exploration permits in the south of Spain and 1,106 km2 in Portugal. Focused on innovation and the most advanced technology to develop modern and sustainable mines, MATSA is a 50:50 joint venture company of Mubadala Investment Company, which manages a global asset portfolio, endorsing the vision of a globally integrated and diversified economy through sustainable returns for its shareholder, the Government of Abu Dhabi, and Trafigura, one of the world’s leading commodity trading houses.