Our upgraded understanding of the structural controls of the mineralization suggests longer potential strike length possibilities which we will initially follow-up to the south in SES21-038.  This hole will be collared 50 meters northeast of SES20-031 which just touched on mineralization.  As we look to extending the 8 Lens to the south on Section 70S, and locating the potential copper-rich zones there, we are also making drill plans for extension of the 8 Lens to the north and to re-visit the Discovery Lens area.” 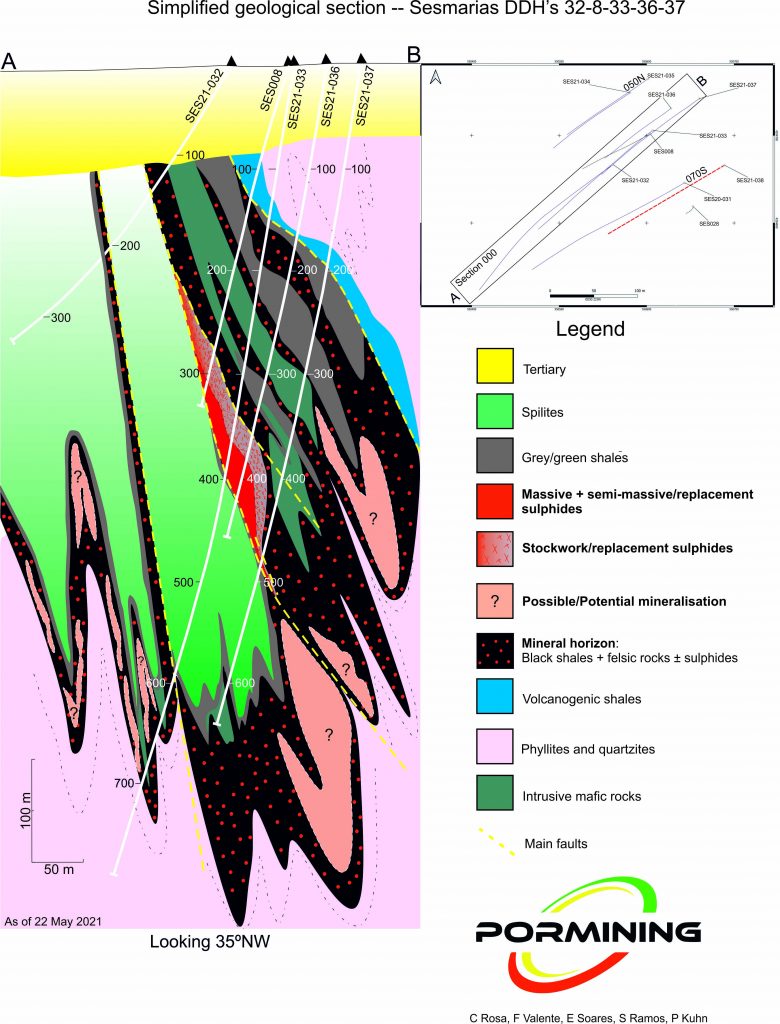 Figure 1.  Plan view of Sesmarias North drilling, with cross section lines (in blue) and surface expression of the 8 Lens Target Zone (in red).  Drilling is complete on Section 000 for now, and the drill rig has moved southeast to Section 070 S.  The new hole, SES21-038, on Section 070 S, targets potential massive sulfide mineralization in a geological position equivalent to mineralization intersected in SES21-033 and 036.

SES21-032.  As reported in February 2021, this hole cut the mineral horizon black shales, but above and distal to massive sulfide mineralization, as shown in the cross section below.  Results included low anomalous levels of important indicator metals, including arsenic, antimony, manganese, and molybdenum.  Copper, lead, and zinc showed weakly elevated levels, as well, suggesting some measure of proximity to massive mineralization in the subsequent drill holes.  This kind of geochemical pattern will assist in vectoring towards mineralization in future target areas.

SES21-033.  Discovery of downdip massive sulfide mineralization of the 8 Lens in SES21-033, collared five meters northeast of SES008.  After passing through the upper bounding fault zone, the hole intercepted 31.4 meters of disseminated, laminated, and stockwork sulfide mineralization, beginning from a depth of 331.6 meters and continuing downwards to 363.0 meters.  Total amount of sulfides generally increases with depth, as do anomalous levels of copper, lead, and zinc.  Significant copper-lead-zinc mineralization in massive sulfide material begins at 363.0 meters and terminates at 385.25 meters at the lower fault.  The complete mineral zone, bounded by faults, totals 53.65 meters.

SES21-036.  This hole was collared 30 meters to the northeast of SES21-033.  In hole 036, the entire fault-bounded zone of sulfide-bearing black shales and volcanics increases to 80.2 meters, with 17.0 meters of massive sulfide mineralization visible in the core.  The hole entered the sulfide mineralized zone at 342.90 meters, with increasing and more intense stockwork mineralization followed by semi-massive sulfides downwards to 406.10 meters.  Metal values increase downhole with increased amounts of sulfides.  The drillhole passed through semi-massive sulfides at this point, and continued through massive mineralization to 423.10 meters, where it is truncated by a fault.  The mass also shows internal higher-grade base metal zonation, as noted in the table below.  Further review is necessary to assist in vectoring towards the potential high-grade portions of the deposit.

Table 2.  SES21-036 intercept information.  Note copper-gold association over the 56-meter stockwork/semi-massive/massive interval.  We see this spatial gold-copper correlation in other holes, as gold appears to act as an indicator metal for close proximity to the massive sulfide mineralization.

SES21-037.  To attempt to further increase the downdip projection of the 8 Lens, this hole was collared 30 meters to the northeast of SES21-036 along Section 000.  However, the massive sulfide body appears to be thinning with depth, and increased faulting surely complicates the sulfide mineralized zone in SES21-037.  Geological review is ongoing.  Sampling will commence upon completion of the review and compilation of the new information.  Results will be expected towards the end of June.

Geological and geochemical results from drilling along Section 000 suggest a downdip projection of about 150 meters of massive sulfides on this section, up to 20 meters thick, and lying within a wider package of lower grade stockwork/replacement sulfide mineralization.  Results from both a recent mise-a-la-masse geophysical study and a coincident grid geochemical survey covering the overall 8 Lens target area suggest further massive sulfide potential, both to the northwest and to the southeast. 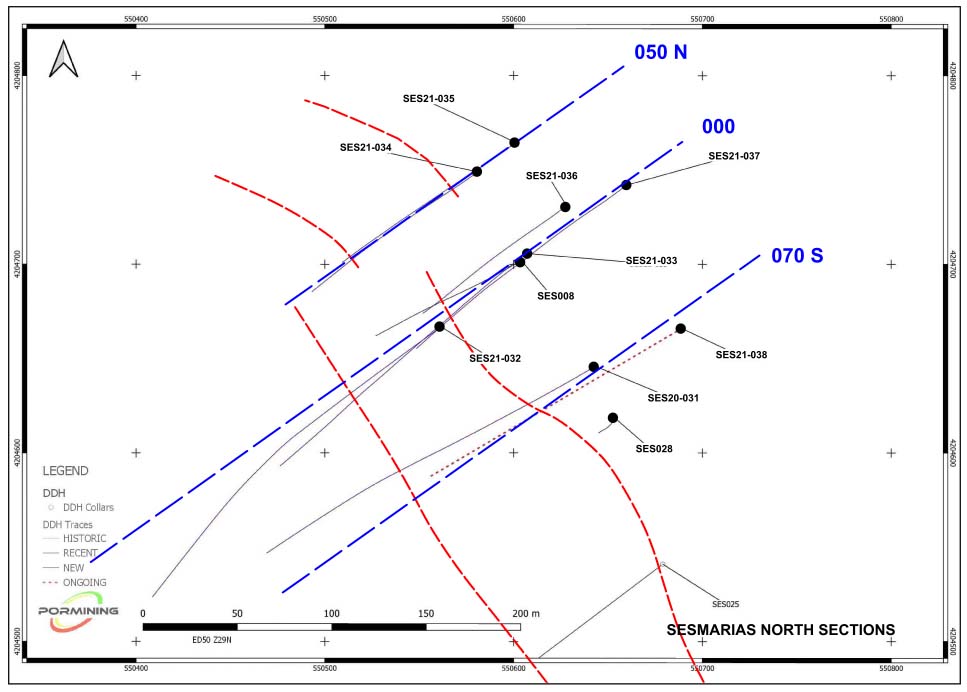 Figure 2.  Section 000:  Simplified geological section, showing massive sulfides and stockwork zone in SES008, SES21-033, and SES21-036.   The Company just completed SES21-037, but has not yet fully reviewed in detail, nor sampled the hole at this time.  The work is in progress, and the Company expects results by the end of June.  Note that the mineralized zone from SES008 downdip to SES21-036 is bounded by faulting.

The Company drilled two holes on Section 050 N, located 50 meters north of Section 000.  Prior to drilling we suspected possible east-west faulting between the two sections, with unknown transposition between the north side and south side of the fault.

SES21-034 and SES21-035.  These two holes targeted the northerly continuation of the 8 Lens in roughly the same geological position of the massive sulfide zone intersected in SES21-033.  However, geological complications caused by faulting and folding of the target units appear, for all practical appearances, to have transposed the massive sulfide targets somewhat to the east.  As both drill holes now appear to have been collared too far to the west, the results indicate that the Company drilled over the potential massive sulfide zone, just as SES21-032 did in Section 000.  SES21-034 crossed mineral horizon gray and black shales with elevated results in indicator metals arsenic and antimony, as well as lead.  SES21-035 crossed 12.2 meters of stockwork sulfides in mineral horizon black shales from 333.90 meters to 346.10 meters.  Geochemical results show anomalous gold, silver, copper, lead, and zinc levels, as well as elevated indicator metals antimony and arsenic, suggesting close proximity to a potential massive sulfide zone.

Table 3.  SES21-035 stockwork intercept results are strongly anomalous and suggest potential for nearby massive sulfide mineralization.  The Company is planning to drill further on Section 050 N.  Given this anomalism and a good understanding of the geology, it is apparent that the next hole on this section should be collared to the northeast of SES21-035, to target northerly extension of the 8 Lens and potential copper-zinc mineralization.

In addition to continued work in the Sesmarias North area around the 8 Lens, the Company anticipates moving forward on exploration targets to the north of the 8 Lens in the Brejo area, as reported in the news release of February 24, 2021.  Access to potential drilling sites is permitted now, and we are looking to add a second drill rig to the program in the near future.  The Company is also re-mapping the Monte da Bela Vista target area and is in the midst of a 375-sample, grid soil collection program to analyze the material using ultra-trace level analytical techniques in a program to assist in target definition and drill collar location.

On behalf of the Board,
“Paul W. Kuhn”