Avrupa Minerals Ltd. (TSX-V: AVU) is pleased to report on first operations at its recently-acquired Kolima Project in the Pyhäsalmi VMS Belt in central Finland.  The Company announced an agreement with privately-held Akkerman Exploration B.V. to acquire subsidiary Akkerman Finland Oy (see news release of December 20, 2021) and has now completed the first portion of the acquisition (see news release of March 9, 2022).  Akkerman Finland Oy (AFOy) holds three Mineral Reservations including two for copper-zinc massive sulfide deposits and one for potential of gold mineralization, and one Exploration Permit application for copper- and zinc-bearing massive sulfide mineralization at Kolima.

The Geological Survey of Finland (GTK) originally discovered widespread, low grade zinc mineralization in the Kolima-Kärna area in the mid-1950’s, and followed with extensive exploration in the district until the early 1980’s.  GTK drilled 70 holes in this area, identifying further widespread disseminated and occasional thin bedded (up to 1-2 meters), semi-massive sulfide zinc-lead-silver mineralization.  The occurrences, spread over an area of 200-400 meters by 2000 meters in strike, are interpreted to be distal-type volcanogenic massive sulfide mineralization.  However, GTK workers did not observe proximal-style sulfide massive mineralization during the historic work.  No further exploration followed until AFOy returned to the area in 2019 to check regional geology, review selected historic drill core, and sample the core with a handheld XRF machine.  AFOy observed, at the time, that mineralization was more widespread and more intense than expected after review of the old reports. Relogging of the drill core showed that significant mineralized intervals had not been sampled.  Subsequently, AFOy requested a mineral reservation from the Finnish government (Tukes) of 187 km2 in early 2020.

Figures 3 and 4. Outline of original Kolima Reservation, located in Viitasaari Municipality, 375 km north of Helsinki, with GTK drill hole locations at Kolima-Kärna from 1957 to 1983.

Based on compilation and interpretation of historic drilling results, geologic mapping, and airborne magnetometry, AFOy commissioned a SkyTEM survey of 94 line-kilometers over Kolima-Kärna target areas in 2021.  The work produced three significant target conductors, two at shallow depth (20 to 100 meters), and a third at intermediate depth (125 to 250 meters).  Targets 1 and 3, located along strike of the apparent mineralized host rock, appear to be the most interesting, based on correlation with previous work and re-interpretation of the historic data.  While also interesting, Target 2 is located, for the most part, under Lake Kolima, and deemed partially inaccessible for social and environmental reasons at this time.

In January 2022, AFOy submitted an Exploration Permit application covering these two most promising areas for potential mineralization, excluding sensitive land areas and possible target locations covered by bodies of water.  Completion of the application process will take upwards of a year to clear all rules and regulations related to Finnish mining law.  However, in the meantime, basic, but significant exploration and drill targeting work will be completed within the license application area. 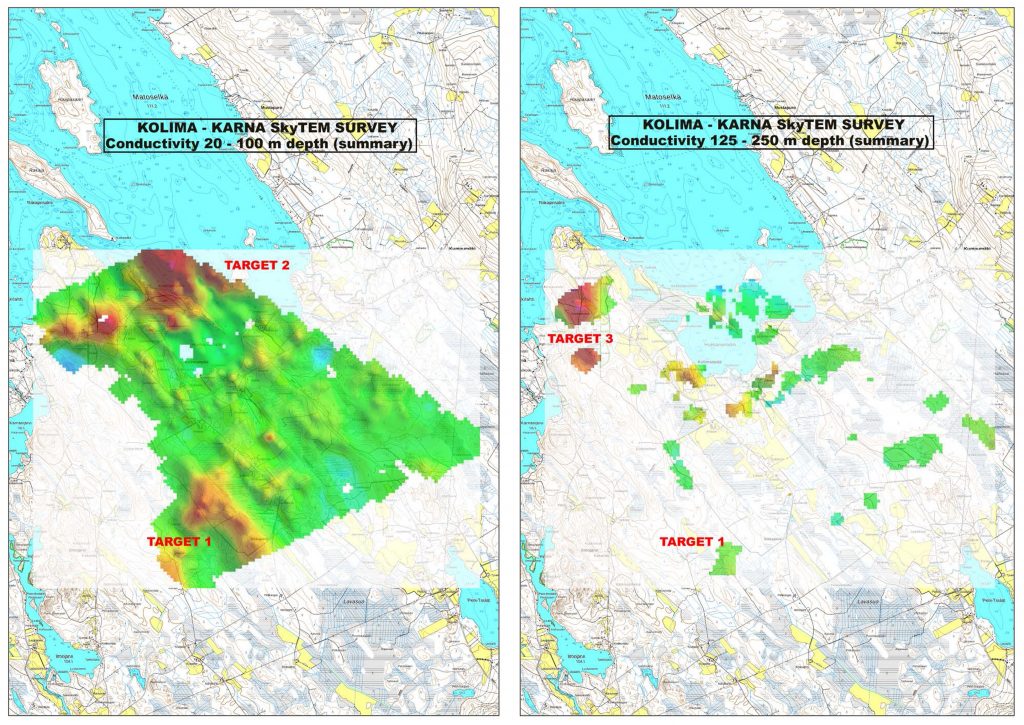 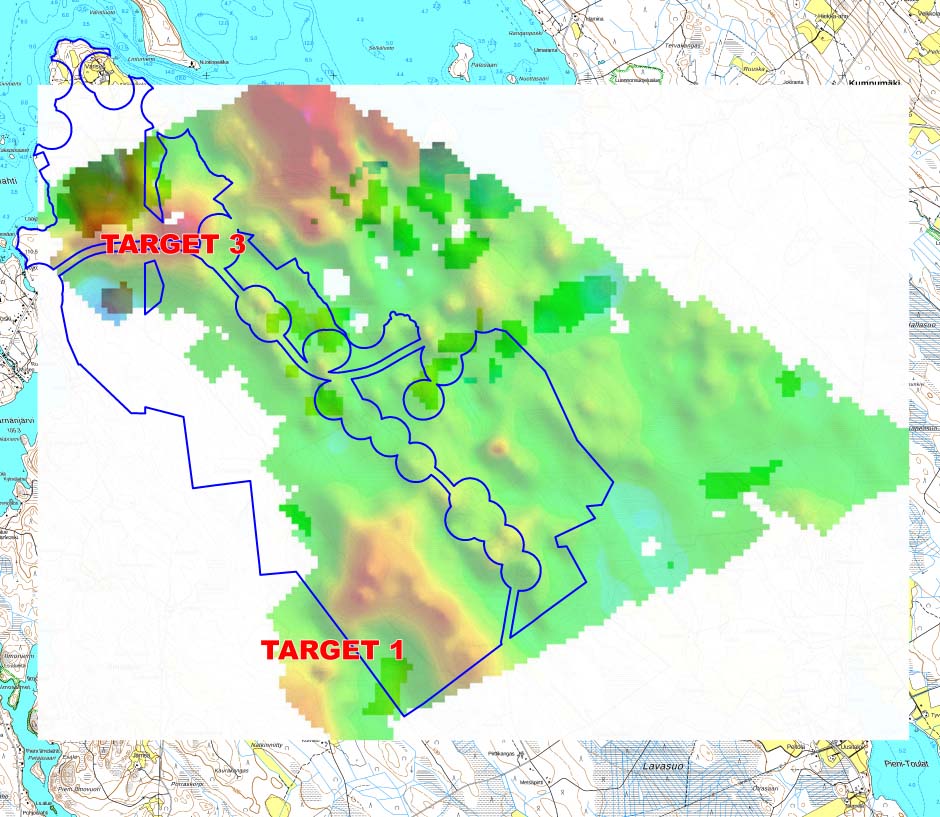 The initial work program is contracted to the GTK in Rovaniemi, north-central Finland, and is presently underway, under direction of personnel familiar with the Kärna mineralization and previous exploration history in the district.  We expect to collect 200 to 300 core samples over 800 meters of selected core from four different drill holes drilled from northwest to southeast along a 2000-meter strike length.  The work will be completed by mid-April and multi-element sample results are expected in the second half of May.  Details of further work will be planned and implemented as geological and geochemical results warrant, with the goal of selecting initial drill target locations in the Kärna mineral trend.  Further work, possibly ionic leach soil sampling and/or ground geophysical methods over the Target 1 area, will also be considered for the upcoming field season.

In addition to work on the Kolima License application area, the Company plans to start field work on the Kangasjärvi Reservation area within the next 3-4 weeks in order to expedite the exploration license application process.  AFOy recently acquired historic drill hole data for areas around the historic Kangasjärvi Mine, and completed 92 line-kilometers of SkyTEM geophysical survey during 2021.  Further information on progress in the Kangasjärvi program will be forthcoming.

Avrupa Minerals Ltd. is a growth-oriented junior exploration and development company directed to discovery of mineral deposits, using a hybrid prospect generator business model.  The Company holds one 100%-owned license in Portugal, the Alvalade VMS Project, now optioned to Sandfire MATSA in an earn-in joint venture agreement.  Avrupa focuses its project generation work in politically stable and prospective regions of Europe, presently including Portugal, Finland, and Kosovo.  The Company continues to seek and develop other opportunities around Europe.