Avrupa Minerals reports on progress in Kosovo and Portugal

Avrupa Minerals Ltd. (AVU:TSXV) is pleased to report on progress at drilling projects in Kosovo and Portugal.  The Company’s partners funded two drill programs during 2017.  In Kosovo, Byrnecut International Ltd. (“BIL”) completed an 18-hole, 6,280-meter core drilling program at the Slivovo Gold Project, while in Portugal Blackheath Resources Inc. (“BHR”) completed a single, exploratory test hole at the Covas Tungsten Project where Avrupa is the operator.

The 2017 drill program was originally planned for 5,670 meters. The program was designed to focus on five areas of interest.  These were designated as potential target areas to significantly expand the known, near-deposit mineralization modeled by BIL as part of their detailed technical study completed at the end of 2016.  The study fulfilled their 85% earn-in commitment in the Project.  Avrupa is no longer contributing to the program and expects to be diluted to a 2% NSR in 2018. The areas of interest (Figure 1) were designated as:

The targeting process for the program was assisted by utilization of data and modeling from previous work phases at Slivovo, which included:

Targets were selected for viability based on three major factors:

The following figure shows the locations of the five target areas and the 2017 drill holes and traces. 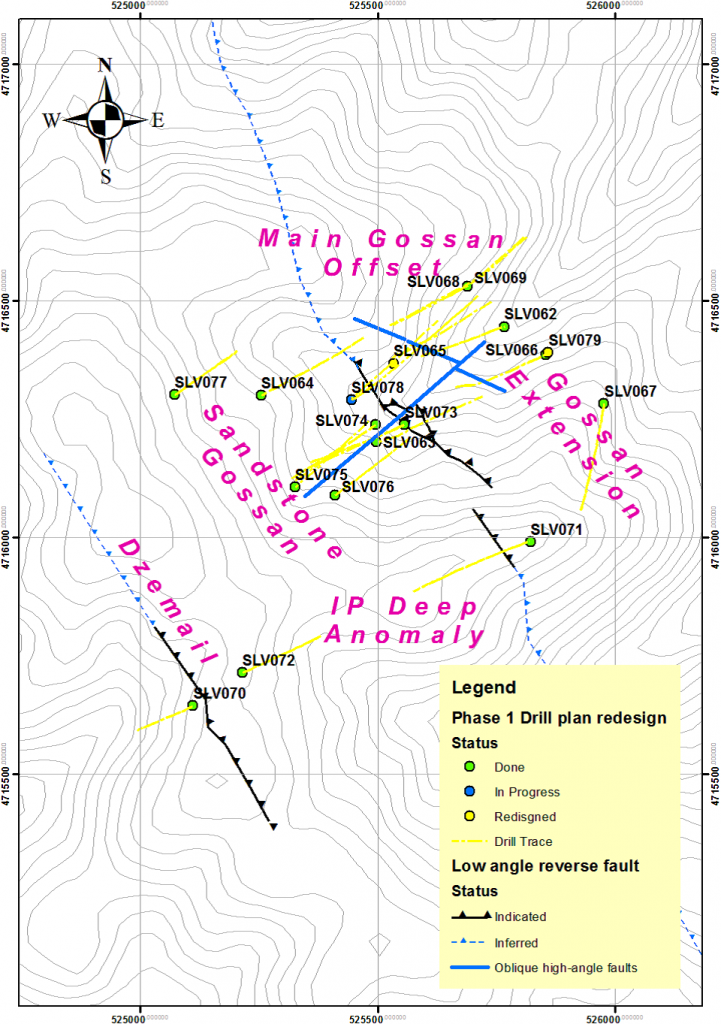 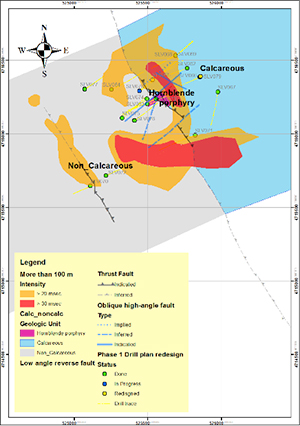 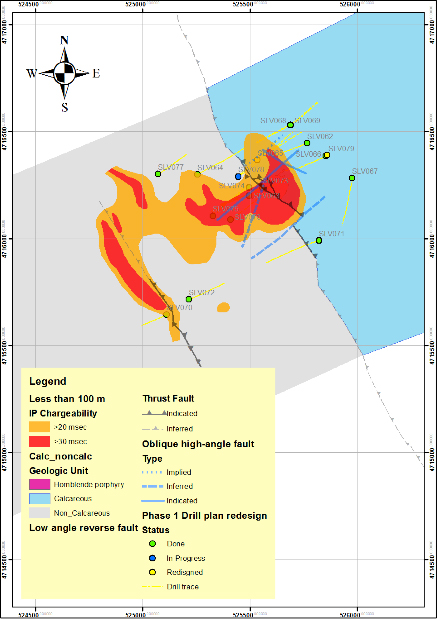 Figures 2 and 3.  Illustrations of the location of the IP chargeability anomalies that factored into the targeting process for the 2017 drilling program (reproduced from BIL summary report, J. Geier, 2017) 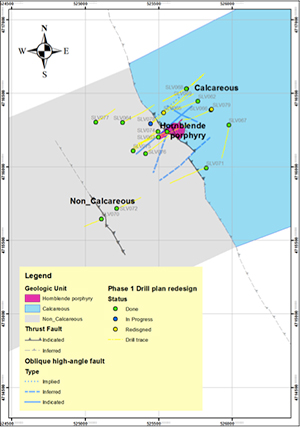 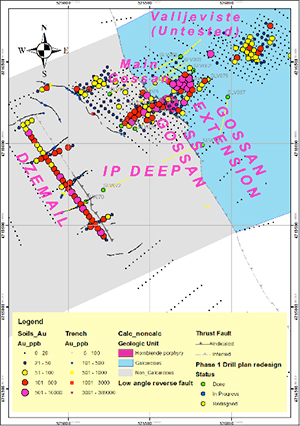 Figures 4 and 5.  Illustrations of the geology and structure at Slivovo, then overlain by anomalous gold-in-soil geochemistry at the Project (reproduced from BIL summary report, J. Geier, 2017).

Results from the drilling were mixed. New geological and structural information gained from the work indicated that the complexity of the Slivovo system is greater than originally suspected. Geochemical results from sampling of the mineralized core did not significantly extend near-surface gold mineralization. The combination of these results indicated new mineral possibilities in the immediate Slivovo target area, but none close enough to the surface to significantly increase the size of the present, potentially surface-mineable Slivovo gold deposit. Avrupa reported an indicated mineral resource conforming to NI 43-101 definitions of 640,000 mt of 4.80 g/t gold and 14.68 g/t silver, for 98,700 ounces of gold and 302,000 ounces of silver (May 5, 2016).

BIL commissioned a follow-up, independent technical report to verify potential of significant mineralization around the Slivovo deposit, at Peshter and Brus, as well as around the remaining areas of the license. Results of the independent study, completed in November 2017, diverged somewhat from earlier work, particularly in genesis and placement of the mineralization in the Slivovo area. Earlier work assumed mineral-bearing fluids originated from perhaps a single, large porphyry intrusive source on the property, allowing for potential of a larger deposit at Slivovo. The new work presumes however that Slivovo gold mineralization is sourced from a large, off-property intrusive center. Numerous small, satellite porphyritic intrusions emplaced perpendicularly to the mineral-hosting calcareous rocks at Slivovo, thus forming small mineral bodies around the Slivovo gold deposit. The independent study finally suggests a number of small (10K) to medium size (100K) targets within the license area, as shown below. 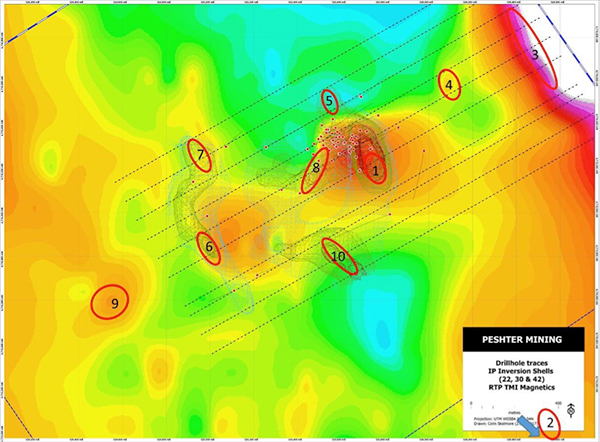 Figure 6. Range of targets on the Slivovo license. The Brus target, #2, lies off the map to the SE of target #10. Targets #1, #2, and #3, are the highest priority targets according to the independent study, with suggested possible target size of up to 100K ounces (from BIL Independent Geological Report, 2017).

Avrupa continues to allow Byrnecut to fully fund the Project to the point where the Company will be diluted to below 10% ownership, thus assuming a 2% NSR position in the Slivovo Project.

The Covas Project hosts a reported conformable to NI 43-101 indicated mineral resource of 449,800 MTU’s WO3 and an inferred mineral resource 767,100 MTU’s WO3 (as reported in the AVU news release of April 1, 2015).  Mineralization is hosted in seven discrete bodies surrounding a presumed buried granitic intrusion.  Over 80% of the indicated and inferred resources lie within 60 meters of the surface.  The price of tungsten lies close to US$ 300 per metric tonne unit (MTU), up from under US$ 200 at the end of the 2016.
“
Avrupa’s partner at Covas, Blackheath Resources Inc., funded a single 225-meter drill hole to partially test for the possibility of a large-tonnage, close-to-the-surface, bulk-mineable, disseminated tungsten deposit directly related to or hosted in the presumed porphyritic granitic Covas intrusive body.  Surface and close-to-surface indications for potential mineralization included strong alteration affiliated with an intense linear, negative magnetics anomaly, multi-element geochemical anomalism contained in soil samples covering the linear magnetics anomaly, and supporting IP/chargeability anomalism.  Following is a plan view of the target area, as well as a conceptual diagram illustrating the technical merits for the targeting at the Covas site. 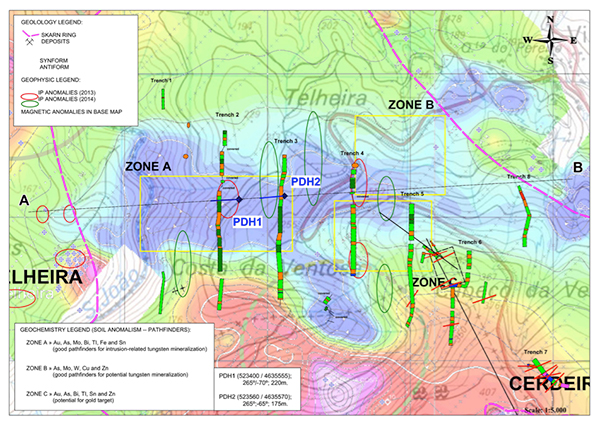 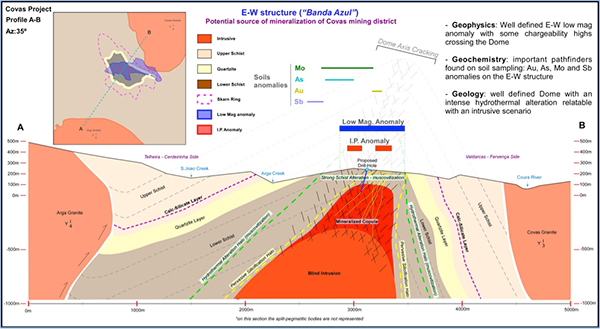 The single drill hole partially tested the target idea.  Alteration was present throughout the hole, particularly strong silicification through the bottom half of the hole.  Porphyritic intrusive rocks were present in the hole in the form of cross-cutting dikes. We are awaiting assay results from the laboratory.

To date, BHR has funded approximately 1.75 million euros of exploration at Covas, and holds 75% of the Project according to the amended earn-in agreement (see AVU news release dated May 12, 2014).

Paul W. Kuhn, President and CEO of Avrupa Minerals Ltd., commented, “The Company continues to successfully advance its programs in Kosovo and Portugal through partner funding.  We intend to continue to advance all of our quality projects in both countries in 2018, in addition to potentially completing new joint ventures on our Pyrite Belt Projects in South Portugal.”

The Company currently holds eight exploration licenses in three European countries, including five in Portugal covering 2,911 km2, two in Kosovo covering 47 km2, and one in Germany covering 307 km2.  Avrupa now has three active option and joint venture agreements, two in Portugal and one in Kosovo, including: