The Hallaperä exploration license application is located near the town of Kiuruvesi, about 20 kilometers east of the Pyhäsalmi Mine and processing plant.  The application area covers known copper and zinc sulfide mineralization discovered by Outokumpu Oy in 1967, and partially outlined by drilling of 42 holes during the period 1967 to 1990.  The known mineralization extends for more than 1,000 meters, and is open at depth below 150 meters.

Figures 1 and 2. Location of the new Hallaperä exploration license application in the Pyhäsalmi District.

Paul W. Kuhn, President and CEO of Avrupa noted, “The Hallaperä license application is the Company’s third in the Pyhäsalmi district.  It covers known copper-zinc sulfide mineralization open at depth.  It is well-worth noting that prospective lands in the general area of the Hallaperä application are held by a major mining company who may now be a direct competitor to AVU, but is also potentially a joint venture partner, as we continue exploration in the area.” 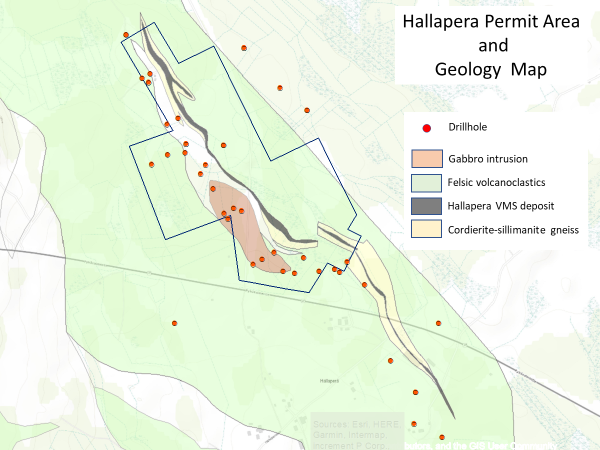 Figure 3. Map illustrating the application boundaries, the outline of the deposit, its immediate volcano-sedimentary host rocks, and previous drilling. The application area is actually the former mining concession granted to Outokumpu Oy. The permit area is bound to the south by the highway between Pyhäsalmi and Kiuruvesi.

The main Hallaperä massive sulfide body was outlined in 1967 by 21 drill holes in the initial phase of drilling over a total strike length of 1,150 meters.  It is a plate-like body with an average thickness of 3 meters, up a maximum width of 18 meters.  The strike is in a NNW-SSE direction, with a dip of 60-70 degrees to the SW.  A smaller extension continues across the highway to the SSE over an additional length of 650 meters.  The sulfide body was further outlined by subsequent drilling of another 21 holes drilled between 1967 and 1990, and remains open at depth.

Mineralization includes both semi-massive sulfide and breccia-type characteristics, surrounded by disseminated sulfides.  There is no apparent visible zonation. The highest metal grades are associated with breccia-type mineralization, which contains rounded fragments of silica in a matrix of sulfides.  Pyrrhotite and pyrite are the dominant ore minerals, with chalcopyrite a minor constituent.  In places, sphalerite and magnetite are also abundant.

In 1971, Outokumpu produced an internal (non-compliant to NI 43-101 requirements) resource calculation for the Hallaperä deposit, using the cross-sectional method.  The reported total estimate was 3.1 Mt @ 0.47% copper and 0.98% zinc, with no calculations for lead, silver, and gold.

Note:  Historic resource calculations provided in Outokumpu Oy internal reports were not prepared to standards of NI 43-101 reporting.  While there is no reason, one way or the other, to dispute these historic reports, Avrupa Minerals does not and will not rely on the accuracy of this information to make further exploration plans and/or decisions.  The information is presented merely to indicate that massive sulfide mineralization is present, and was discovered in certain, identifiable rock units at Hallaperä.  The deposit has not been mined.

At present, the Company is compiling and evaluating historic drill hole information in order to build a mineralization model to support further exploration.  Historic, shallow-penetrating ground EM geophysics outlined close-to-surface mineralization, and follow-up drilling defined mineralization to a depth of just 150 meters.  Samples were systematically analysed for only copper, zinc, iron, and sulfur.  Clearly, with new geochemical and geophysical exploration, followed by drilling, there is room for further expansion of the Hallaperä mineral lens, particularly at depth, but possibly along strike, as well.

Further information concerning both the permitting and exploration processes will be presented, as progress is made in both tasks.