Avrupa Minerals Ltd. (AVU:TSXV) is pleased to report that drilling continues to expand and upgrade polymetallic, massive sulfide mineralization at the Sesmarias Copper-Zinc Prospect within the Alvalade Project (Alentejo, Portugal).  The program is a joint venture between Avrupa Minerals and Minas de Aguas Teñidas, S.A. (MATSA) and is operated by Avrupa through the JV entity PorMining Lda.  To date, the Company has completed 16 diamond drill holes on six different fences at Sesmarias, totaling 8,150 meters, and is now drilling a 17th hole testing potential massive sulfide mineralization in the gap between Section 120S and Section 350S.

Paul W. Kuhn, President and CEO of Avrupa Minerals, commented, “With the long, mineralized sulfide intercept in SES21-044, we have now confirmed the structural position of a robust mineral system over 350 meters in length in the SES North sector alone, within the known total Sesmarias massive sulfide mineralization of 1.7 kilometers.  Continuation of copper- and zinc-bearing mineralization is open both to the north and south, and to some depth below present drilling.  The SES21-044 intercept is now the longest, to date, in the joint venture, and shows good, continuous copper, lead, zinc, silver, and gold grades over the majority of the intercept.  The overall intercept includes intervals of higher-grade mineralization, and further evidence of metals’ zonation in the deposit.  We are looking forward to further enlargement of the Sesmarias mineralization and continued improvement of the metals’ grades.”

To date, in the MATSA JV, the Company completed 16 drill holes (including three holes lost due to difficult downhole drilling conditions) in the SES North sector, and one scout hole in the SES Central sector (SES21-041), totaling 8,150 meters.  The Company drilled one scout hole, totaling 614 meters, in the Caveira District (CAV21-001), located 16 kilometers north of Sesmarias. 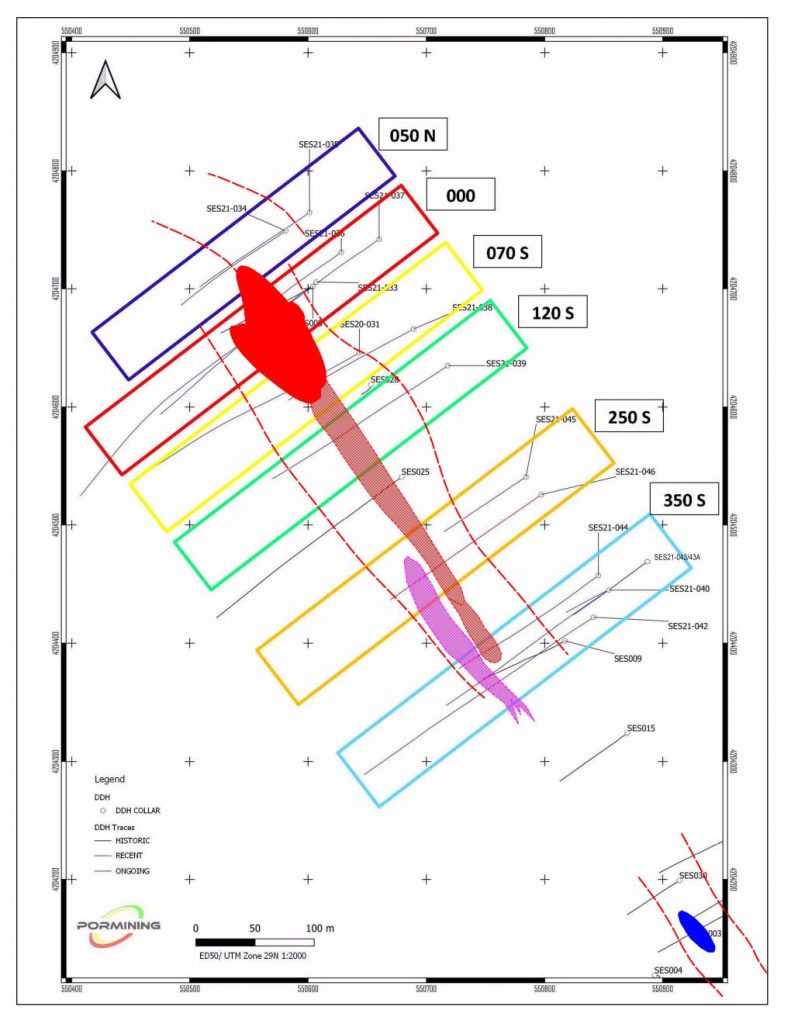 Figure 1.  Drill locations at Sesmarias North, along with plan view of massive sulfide lenses projected to the surface.  SES21-044 is located along Section 350 S, and SES21-046 is located in Section 250 S.

Following is a summary of the results from SES21-044: 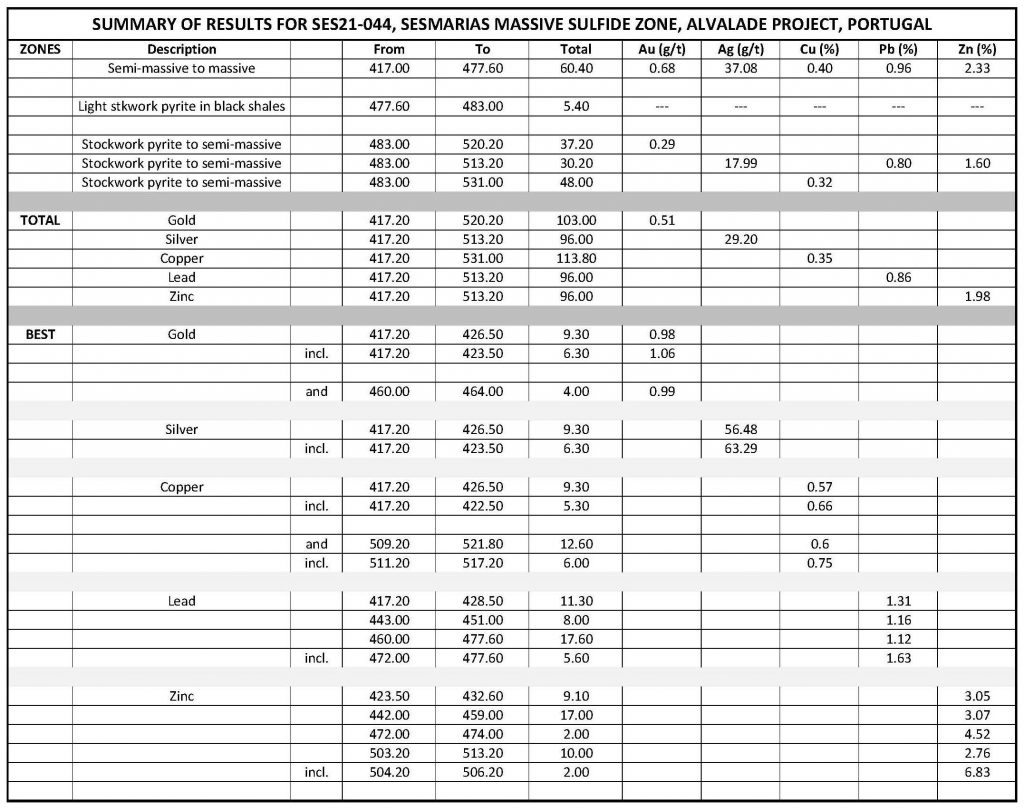 Section 350 S demonstrates the position of massive sulfide mineralization in a district-scale fold system at Sesmarias North.  The massive sulfide body is heavily folded, itself, making it difficult to accurately estimate original true thickness of the beds, though best thinking puts it at 30-40 meters. 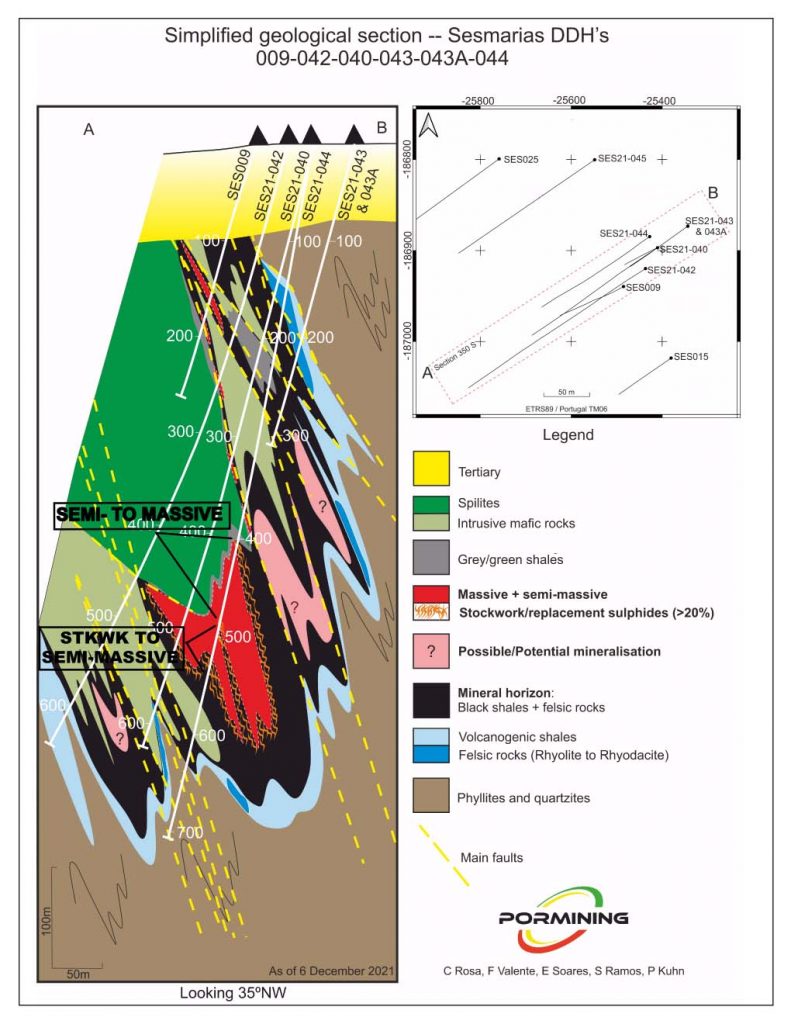 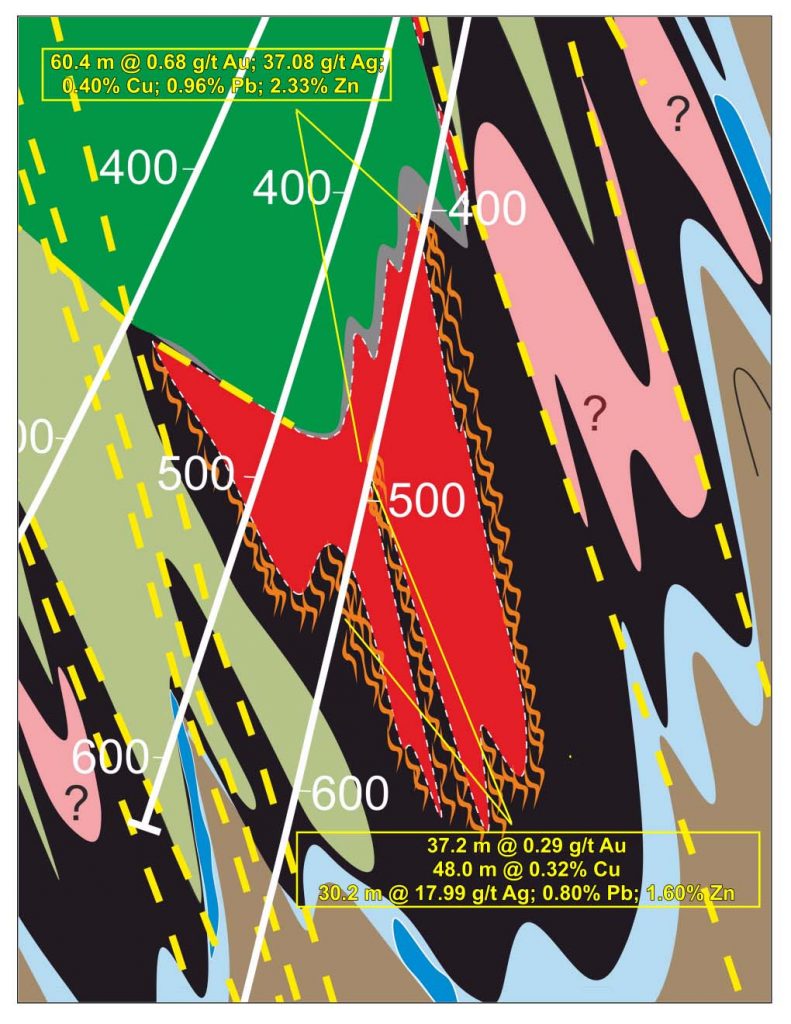 Figures 2a and 2b.  350S cross section, including SES21-044, and enlargement of the massive sulfide zone

Combining the results and the cross section, note that the longest, most continuous intercept lies in the upper part of the massive sulfide mineralization.  However, good grades may also be found in the geologically underlying stockwork zone, found at both the top and bottom of the full intercept.  Strong folding of the mineral zone allows for intersection of the bottom of the sulfide deposit in both the upper and lower portions of the drill intercept.  So far, as shown in this section, drilling cuts off the top of the mineralization (SES21-042), intersects the west limb of the main fold (SES21-040), and in SES21-044 intersects both the east and west limbs of the main fold, as well as the perceived top and bottom of the folded mineralization.  Further drilling below SES21-044 is necessary to extend massive sulfide mineralization at depth in and around the apex of the syncline.

Drilling at SES21-046 is now underway on the 250 S section to test for copper- and zinc-bearing massive sulfide mineralization between SES21-039 and SES21-044.

Minas de Aguas Teñidas, S.A. (MATSA) is a private Spanish mining company, which owns and operates three mines in the province of Huelva (Andalusia, Spain):  Aguas Teñidas, Magdalena, and Sotiel.  MATSA also holds 1,312 km2 of exploration permits in the south of Spain and 1,106 km2 in Portugal. Focused on innovation and the most advanced technology to develop modern and sustainable mines, MATSA is currently a 50:50 joint venture company of Mubadala Investment Company, a sovereign investor managing a global portfolio aimed at generating sustainable returns for its shareholder, the Government of Abu Dhabi, and Trafigura, one of the world’s leading commodity trading houses.

Avrupa Minerals Ltd. is a growth-oriented junior exploration and development company directed to discovery of mineral deposits, using a hybrid prospect generator business model.  The Company holds one 100%-owned license in Portugal, the Alvalade VMS Project, now optioned to MATSA in an earn-in joint venture agreement.  Avrupa focuses its project generation work in politically stable and prospective regions of Europe, presently including Portugal, Finland, and Kosovo.  The Company continues to seek and develop other opportunities around Europe.