Avrupa Minerals Ltd. (AVU:TSXV) is pleased to report that it has signed a binding letter agreement (the “Letter Agreement”) with Dutch holding company, Akkerman Exploration B.V., to acquire 100% ownership of Akkerman Finland OY (“AFOy”).  Finnish-registered AFOy owns three mineral reservations in the past-producing and highly prospective Vihanti-Pyhäsalmi VMS district in central Finland. Deposits in this belt are similar, though much older than those found in the Iberian Pyrite Belt where Avrupa is currently drilling in southern Portugal.  The three projects will be upgraded from a “reservation” to “licenses” as the first step of the exploration program.  Once license areas are defined and the application process is underway, Avrupa will oversee detailed systematic data compilation and review, historic drill core review, basic surface geochemical exploration, and new drill targeting in preparation for drilling when the license applications are approved.

Paul W. Kuhn, President and CEO of Avrupa, commented, “We are excited to make these additions in two active, historic mining districts in Finland to our ongoing projects in Portugal and Kosovo.  The current market for copper and zinc is growing rapidly to support the advancement of new environmentally-friendly technologies that are already important contributions to the manufacture and use of fully electric vehicles.  EV’s use, on average, 180 pounds of copper per vehicle. The historic exploration on these projects by the Geological Survey of Finland and Outokumpu during the 1960’s through the 1980’s will form a strong base to outline new copper-zinc targets in central Finland.  Finally, we are equally excited to acquire a new gold project in the highly prospective Oijärvi gold district close to an existing reported historic resource.”

As a Stage Two earn-in, Avrupa can acquire the remaining 51% of AFOy by issuing a further 1,530,000 common shares and depositing an additional €200,000 into the dedicated account for further exploration expenditures. Avrupa will also pay out the remaining advances of approximately €15,000 to AFOy’s parent company at this stage.

A Technical Committee comprised of one representative from each party will oversee the work programs of each project.  AFOy’s majority shareholder will have the deciding vote during the initial earn-in period.

Avrupa will engage a qualified professional geologist to complete a NI 43-101 compliant report on the projects as part of its due diligence process.  The Company expects to complete the report during the Stage One exploration program as part of a rigorous review of data and drill core from historic operations covering the project areas. 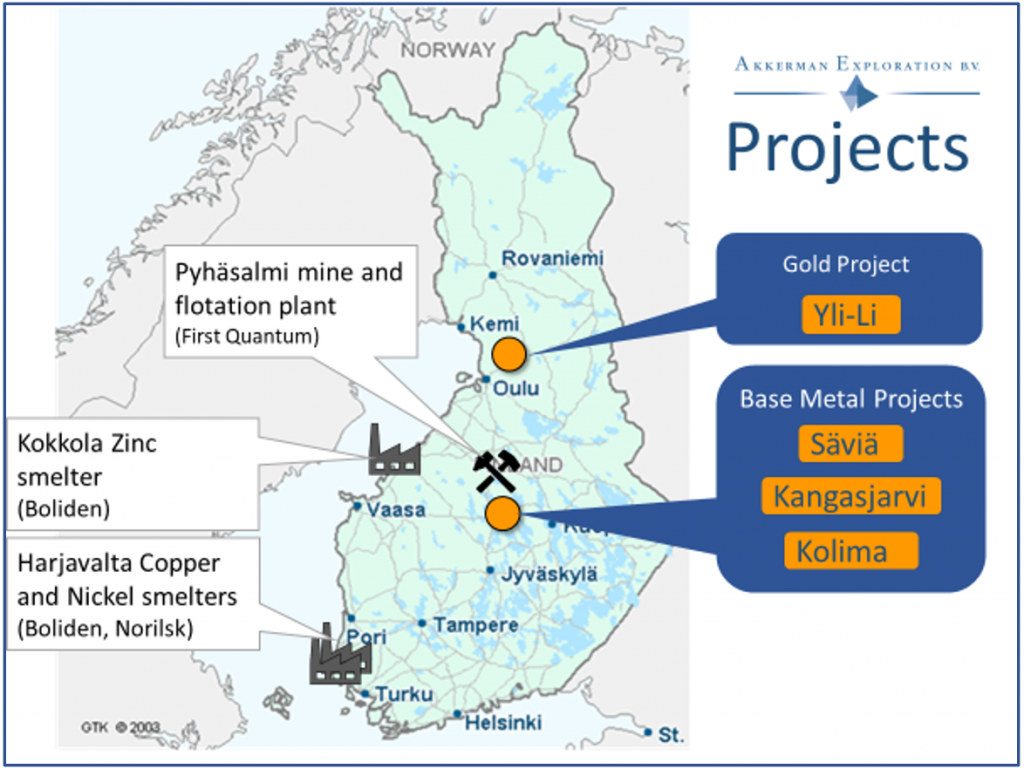 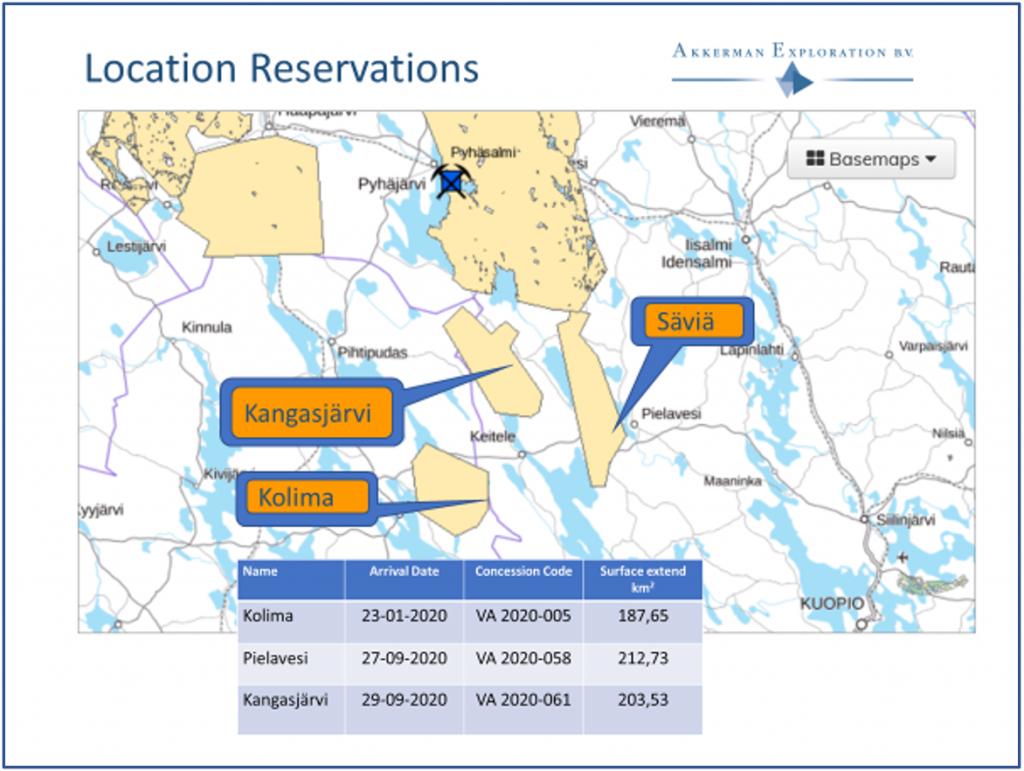 Historic exploration within the Pielavesi Reservation area by the Geological Survey of Finland (GTK) and Outokumpu shows that the Paloniemi-Säviä-Leväniemi Belt offers promising exploration potential.  The Pielavesi reservation covers approximately 213 km2 and has widespread hydrothermal alteration of felsic volcanics which can be traced over 10 kilometers.  Previous operators identified the presence of at least four individual centers of mineralization, including one with clear evidence of a stockwork feeder zone accompanied by massive sulfide deposition containing copper, zinc, and gold.  Despite many years of previous exploration and a large number of holes drilled, known centers of mineralization have not been drilled off and remain open at depth and along strike in both directions.  No systematic exploration of the area has been completed in over 30 years. 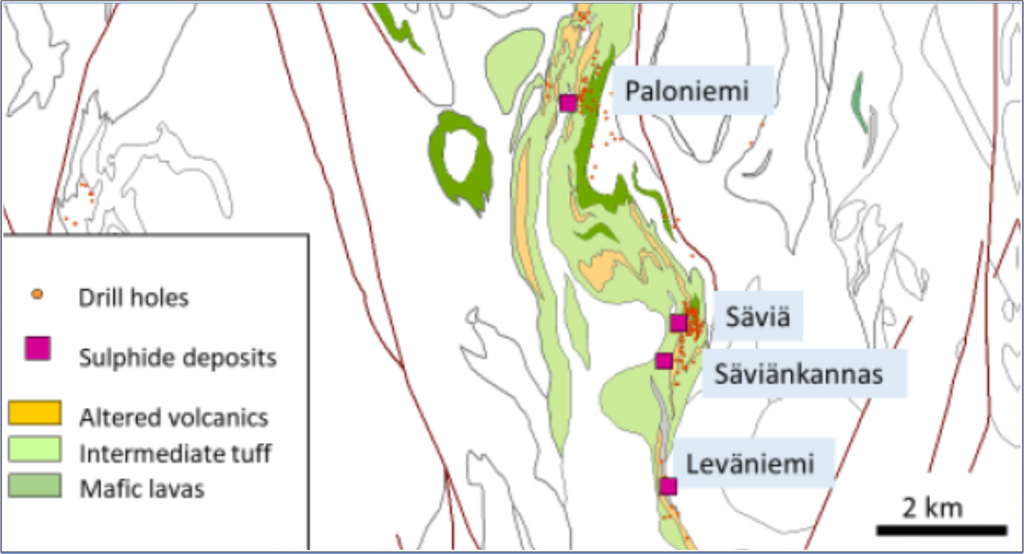 Previous operators completed two historic, non NI 43-101 compliant, resource estimates at the Säviä prospect within the limits of the Pielavesi Property.  The initial review, reported in 1968, and based on 62 drill holes at 50-meter spacings, estimated a copper-rich deposit of 4 million tonnes grading 1.1% copper and a zinc-rich deposit of 1 million tonnes grading 2% zinc.  And, in fact, a number of nearby mineralized holes were not included in the resource estimate, one of which assayed 0.98% copper over 70.5 meters.

Note that both resource estimates are historic in nature, pre-dating NI 43-101, and the Company is not treating them as current resources.  A Qualified Person, as such term is defined in NI 43-101, has not completed sufficient work to confirm the estimates as current mineral resources under NI 43-101, and therefore they cannot be considered reliable and are presented here merely to show the potential of the projects.  Further efforts to confirm the presence of potential mineral resources are planned for the initial exploration period and will commence once the Definitive Agreement is completed.

The 187 km2 Kolima reservation covers a target zone comprised of a thick layer of mineralized distal-type volcanics containing thin beds and layers of zinc-rich massive sulfide mineralization in some areas.  The Geological Survey of Finland (GTK) discovered and explored the area in the period from 1956 to 1983. The GTK found zinc mineralization in an area two kilometers long and 200 to 400 meters wide within strongly altered metasediments and fine-grained volcanic rocks. GTK drilled 70 holes and detected widespread, polymetallic sulfide mineralization occurring as fine disseminations and thin layers of semi-massive sulfides.  Generally, it seems that the currently-known mineralization represents distal-style metals’ deposition within a larger VMS system that has not yet been discovered.  Numerous mineralized boulders containing anomalous gold and copper are present around the site.

AFOy completed a helicopter-supported SkyTEM geophysical survey over the mineralized area of the reservation.  Preliminary analysis of the data by AFOy did not suggest any obvious targeting.  However, recently-completed detailed review of the data by AFOy and AVU outlined subtle anomalism over southern extension of the known volcanics-hosted mineral trend and also outlined a deeper (175 meters), strong geophysical target in a trend of the volcanic rocks parallel to those that host the known zinc mineralization.  There is no reported previous exploration along this second trend, located a few kilometers west of the known zinc showings.

The final date for application for license parcels in the Kolima reservation comes near the end of January 2022.  AFOy and AVU will work during the coming weeks to make appropriate applications for licenses through the licensing process.  Further updates on the progress will be forthcoming. 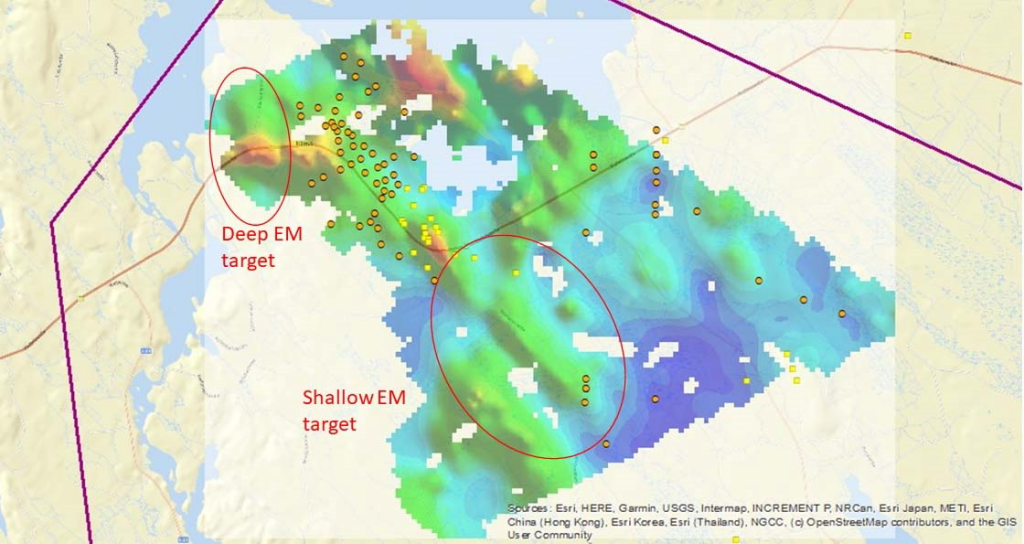 The 203 km2 reservation covers the Kangasjärvi deposit, a satellite deposit of the Pyhäsalmi mine, located about 25 kilometers to the north of the site.  The massive sulfide was exposed at the surface, and Outokumpu mined 1-9% zinc material from the Kangasjärvi open pit in 1984-85 down to <100 meters from the surface.  Exploration drilling by Outokumpu intersected massive sulfides down to 250 meters depth beneath the pit, but did not attempt deeper drilling, leaving the deposit open at depth, as well as along strike.

Note again that both resource estimates are historic in nature, pre-dating NI 43-101, and the Company is not treating them as current resources.  A Qualified Person, as such term is defined in NI 43-101, has not completed sufficient work to confirm the estimates as current mineral resources under NI 43-101, and therefore they cannot be considered reliable and are presented here merely to show the potential of the projects.  Further efforts to confirm the presence of potential mineral resources are planned for the initial exploration period and will commence once the Definitive Agreement is completed.

In addition to the Kangasjärvi deposit, there are at least three other mineral occurrences within the reservation area.  Little work of any sort has been completed anywhere on the reservation for at least 20 years, even though there are historic drill holes throughout the district. 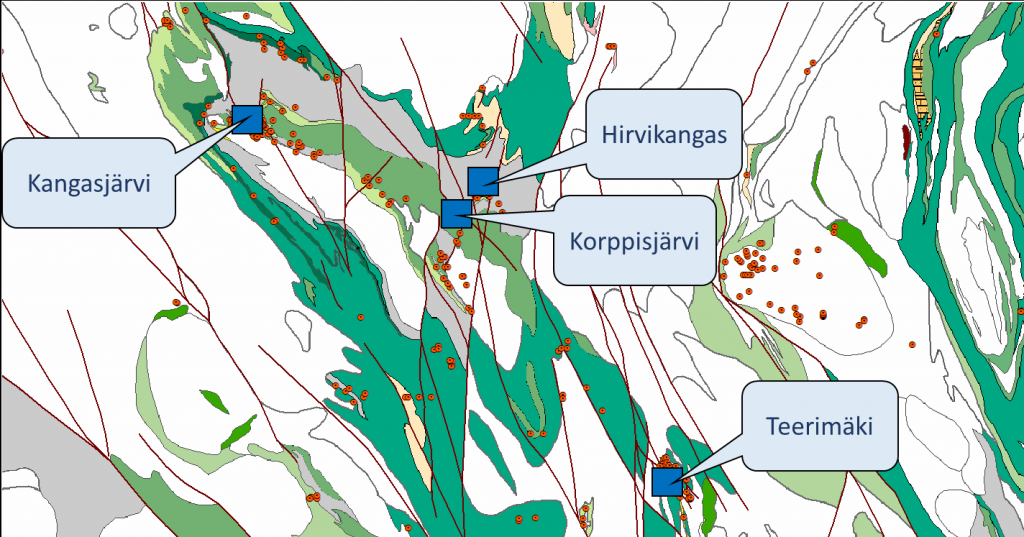 Figure 5. Location of known mineral targets and deposits within the Kangasjärvi reservation area.

AFOy also completed helicopter-supported SkyTEM geophysical work over known significant areas within the Pielavesi and Kangasjärvi reservations.  AFOy and AVU continue to review the results from these surveys.  Further information will be disseminated as we obtain a better understanding of the initial targeting data.

The 332 km2 Yli-li gold reservation covers 30 kilometers strike length of the southern extension of the Oijärvi greenstone belt and major shear zone.  Currently Gold Line Resources Ltd. operates the Oijärvi gold project where they plan to drill over 4,000 meters in a step-out drilling program to expand the known zones of gold mineralization and delineate new targets in the vicinity of the mineralization.  In 2013, Agnico Eagle reported an inferred mineral resource estimate at Kylmäkangas of 1.9 MT at 4 g/t Au and 31 g/t Ag, containing approximately 250,000 ounces of gold and 1.9 million ounces of silver.

Note again that this resource estimate is historic in nature and was reported by a third party.  The Company is not treating the estimate as a current resource.  A Qualified Person, as such term is defined in NI 43-101 and related to Avrupa Minerals Ltd., has not completed sufficient work to confirm the estimates as current mineral resources under NI 43-101, and therefore they cannot be considered reliable from the Company standpoint. The Company cannot confirm the estimates under any circumstances and merely uses the information to suggest potential exploration possibilities on the Yli-li property.

GTK first explored the southern extension of the Oijärvi shear zone, covered by the reservation, from 2001 to 2014.  Initial studies turned up gold-in-till anomalies over intensely sheared and altered rocks.  Limited drilling resulted in one intercept of 3 g/t gold over two meters at the Kupsusselkä prospect.  Given these promising early-stage results, there is clearly need for wider-scale systematic exploration program to determine the best targets within the area.

This news release was prepared by Company management, who take full responsibility for its content.  Paul W. Kuhn, President and CEO of Avrupa Minerals, a Licensed Professional Geologist and a Registered Member of the Society of Mining Engineers, is a Qualified Person as defined by National Instrument 43-101 of the Canadian Securities Administrators.  He has reviewed the technical disclosure in this release.  Mr. Kuhn, the QP, has not only reviewed, but prepared and supervised the preparation of the scientific and technical content in the news release.