Avrupa Minerals Ltd. (AVU:TSXV) announces that drilling re-started on the Alvalade Joint Venture Project in the Pyrite Belt of southern Portugal.  The program is a joint venture between Avrupa Minerals (“AVU” or “Company”) and Minas de Aguas Teñidas, S.A. (“Sandfire MATSA” or “MATSA”).  Avrupa continues to operate the project through the JV entity PorMining Lda.  To date, at Sesmarias North, the Company completed 17 diamond drill holes, totaling 8,900 meters, on six different fences along a strike length of 400 meters, as well as one further drill hole in the Caveira District, totaling 614 meters (see news release of April 4, 2022).

The new phase of drilling (9th overall) will initially target anomalies located between the historic Lousal and Caveira Mines, over a strike length of approximately 11 kilometers.  The first drill hole targets potential mineralization located 300-400 meters northwest of the last reported mineralization in the Lousal Mine.  Following this Lousal Northwest hole, depending on results, we anticipate further testing in the Lousal area, as well as targets at the Monte da Bela Vista prospect drilled by Avrupa in 2012-2014, new targets in the Caveira Mine vicinity, and several strong VTEM geophysical anomalies located between Monte da Bela Vista and the south end of the Caveira Mine mineralized zones.

Once the drill rig is available for return to Sesmarias, or a second rig becomes available, we plan further exploratory drilling within the Central and Southern sectors of the known mineralization.  Previous, wide-spaced drilling by Avrupa demonstrated the presence of robust massive sulfide mineralization over a further strike length of +1,200 meters through the central and southern sectors at Sesmarias. 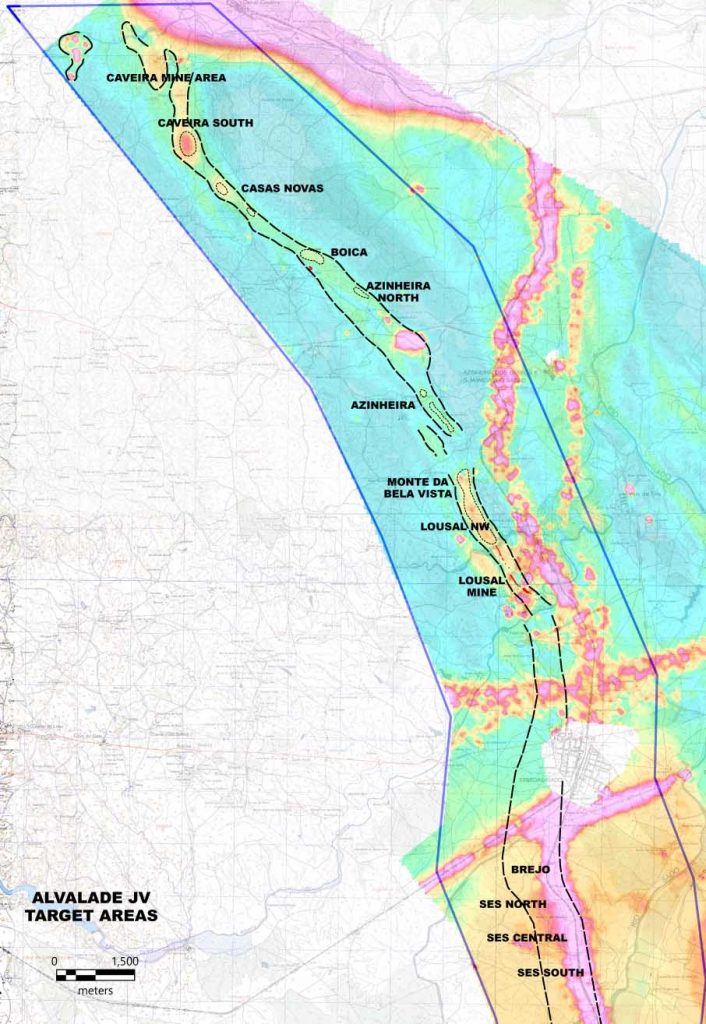 Figure 1. Map of Alvalade Experimental Exploitation License showing general locations of drill target areas which have been selected using a wide range of geological, geophysical, and geochemical tools. Note that the black, dashed lines that traverse the length of the license outline the corridor of favorable geology, geochemistry, and VTEM geophysical conditions. Note also significant interference from railroad tracks, powerlines, and a solar farm in the Azinheira area (all in washed-out purple color). 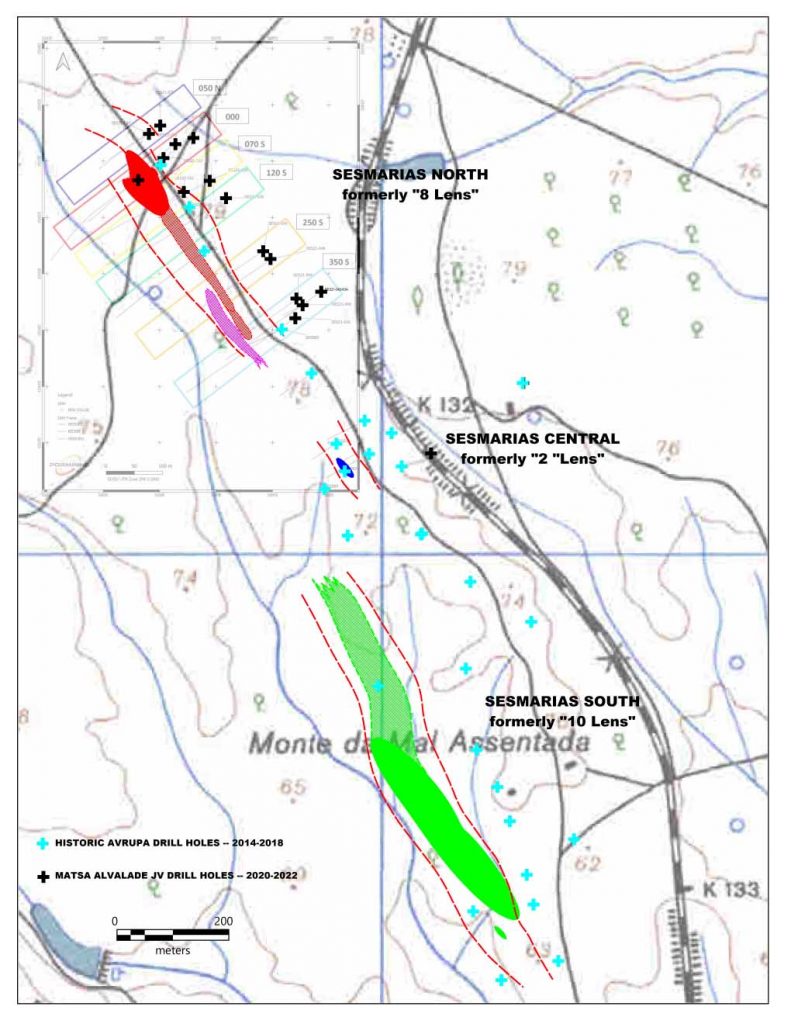 Avrupa expects to drill a further 6,000 meters in 10 to 12 drill holes in the current phase of drilling.  MATSA has indicated that the budget for Phase 9 is in the range of 1.4 to 1.7 million euros.  The budget will also include further re-processing of the VTEM data and an airborne gravity survey to cover the entire license, using modern techniques and detailed location and elevation information to replace a patchwork of historic gravity surveys from the 1990’s.  Historically, gravity surveys are effective tools for locating non-visible, buried massive sulfide bodies in the Iberian Pyrite Belt.  The re-processing of the VTEM data is presently underway, and we expect to perform the gravity survey around mid – Q4 2022.

Paul W. Kuhn, President and CEO of Avrupa, commented, “We are excited to get the drilling going again.  The JV geology team has constructed a set of hard targets along an 11-kilometer strike length between the Lousal and Caveira Mines.  While we have concentrated our efforts at Sesmarias for good reason, and will get back to drilling the Sesmarias copper-zinc prospect, we are also quite excited to test the other VMS targets that we have developed over the past two years.” 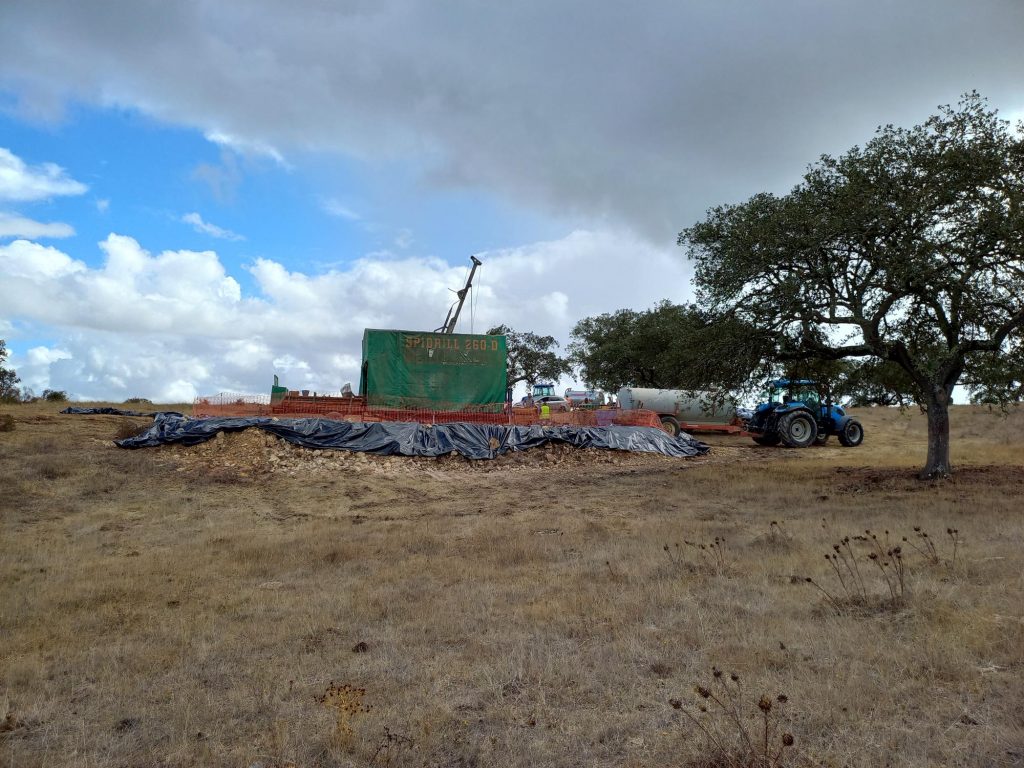 Minas de Aguas Teñidas, S.A. (Sandfire MATSA) is a modern mining company which owns and operates the MATSA Mining Operations in the Huelva province of Spain. With a processing plant located to the north of the Iberian Pyrite Belt that sources ore from three underground mines, Aguas Teñidas and Magdalena Mines in Almonaster la Real and the Sotiel Mine in Calañas, Sandfire MATSA produces copper, zinc and lead mineral concentrates that are sold from the port of Huelva. Sandfire MATSA also holds 1,312 km2 of exploration permits in the south of Spain and 1,106 km2 in Portugal. Sandfire MATSA is a wholly owned company of Sandfire Resources Ltd, a mining and exploration company listed on the Australian Securities Exchange (ASX: SFR).