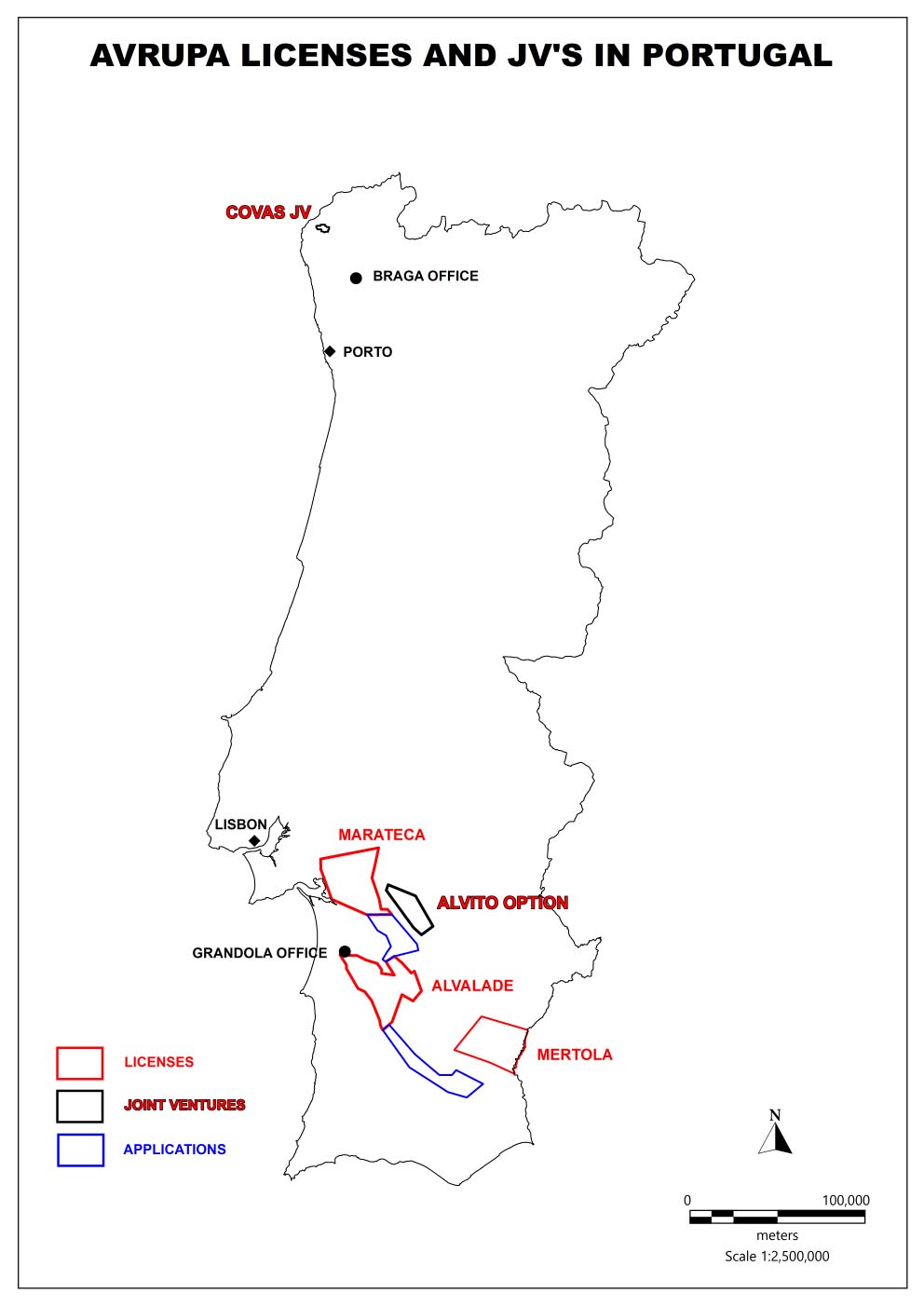 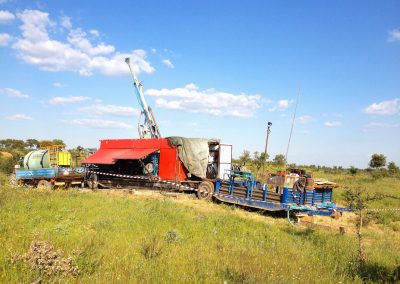 Avrupa Minerals, through its wholly-owned subsidiary, MAEPA Lda., holds 5 exploration licenses in Portugal, spread from the north to the south in the country. Total area under control by Avrupa is approximately 1,753 square kilometers.

Avrupa holds three licenses (Alvalade, Marateca, and Mertola) in the Portuguese portion of the Iberian Pyrite Belt (IPB). The IPB is historically one of the world’s largest and most prolific copper-zinc-iron massive sulfide belts. Two of the Company’s IPB licenses are located to the northwest of, and along trend from the giant Neves Corvo copper-zinc-tin massive sulfide deposit, presently being mined by Lundin Mining.  The third license is located east of Neves Corvo, along a parallel mineral belt that hosts the Aljustrel Mine, currently being mined by Portugal-based Almina Minas do Alentejo, SA.

On March 5, 2018, a LOI was signed to option out Alvalade, Marateca and Mertola licenses to a subsidiary of a North American based international mining company.  The funding partner will provide a first stage earn-in amount of 13 million euros (approximately C$20.3 million) for exploration programs over the next three years to acquire a 51% interest in each of the projects.

The Alvalade license has been the basis of two joint ventures since 2012. Previous partners have funded US$ 7.65 million, to date, for exploration on the license.  Work on Alvalade has resulted in two discoveries to date:  The first is located at the Sesmarias target area where the Company discovered several pods of massive sulfide mineralization over a strike length of 1,800 meters.  The Sesmarias area is located about seven kilometers SE of the Lousal Mine.  Recent re-logging of project drill core and 3D geological modeling of the Sesmarias prospect area show that two previously poorly-defined faults control the location of the main zone of massive sulfide mineralization.  Previous early drilling at Sesmarias (around the SES002 discovery hole) may not have reached this re-defined zone of mineralization, while drilling around the SES010 massive sulfide zone has delineated at least one pod over 400 meters long and up to 20 meters thick.  There are at least four other partially-defined targets in the immediate 1,800-meter long Sesmarias prospect area.

The second discovery at the Monte da Bela Vista target area is a large stockwork zone located about three kilometers north of the Lousal Mine.  Further work is anticipated for both areas during the 2018 field season under the pending joint venture program.

Review of the mining history at Lousal suggests that the deposit, itself, prior to modern mining activities, contained +/- 50 million metric tonnes of iron/copper/zinc-bearing massive sulfide material.  Records indicate that only 15-20 million metric tonnes were actually extracted from the mine, leaving up to possibly 30 million metric tonnes in the ground.  The challenge to the pending joint venture will be to turn this into a mineable resource, as well as utilize Avrupa’s strong technical experience in the Pyrite Belt to find additional copper and zinc ore proximal to the old workings.

Furthermore, there are numerous other target districts around the license in two trends of IPB-style mineralization, the Neves Corvo trend and the Aljustrel trend.  Several holes drilled into the Pombal basin area, located about 15 kilometers south of Sesmarias, encountered weak base metal mineralization and potential VMS-style alteration in the same part of the stratigraphic section as at Sesmarias. Further exploration into the Pombal basin target area is warranted.  In addition, holes in the Monte da Bela Vista, Furadoro, Santa Margarida da Serra, and Faleiros target areas intercepted visible copper mineralization and require further follow-up drilling. Five of these exploration holes contained greater than 0.3% copper over intervals of 1 to 22 meters in width.

In all drilling campaigns, drill targeting was designed to both explore for massive sulfide deposits and to assist in revising and updating the model for geological and structural control of potential mineralization. Avrupa geologists, along with former partner geologists and several consultants, successfully devised a new working model for drill targeting in the northern regions of the Pyrite Belt, thus opening up large new areas for possible massive sulfide mineralization along two or three mineral trends within the JV areas. Most work, to date, has been attempted on the Neves Corvo mineral trend, but now it is clear that more exploration is needed along the other mineral belts that cross the Alvalade license.

Avrupa completed a four-hole scout drilling project in 2010-11 on the Marateca license. Two of the holes intercepted silver-rich stockwork mineralization at the Serrinha location. Two massive sulfide targets at São Martinho and Volta were not reached due to difficult drilling conditions. There are at least eight more target areas are present in the Marateca license area.  The Company drilled two shallow test holes in the Pego do Altar gossan target at the end of 2016, which showed down dip continuation of sulfide mineralization.  The Company recently completed a ground-based gravity survey over the Pego do Altar prospect to enhance subsequent drill targeting.

The third license, Mertola, is located east of Neves Corvo, and covers the eastern portion, in Portugal, of the Aljustrel — São Domingos VMS target belt. The past-producing São Domingos Mine is located close to the east end of the license, and is central to an area of good copper- and zinc-bearing massive sulfide targets. There are numerous known prospects on the license, and core from over 35 holes of historic drilling is available for re-logging and re-sampling.  São Domingos produced 20 – 25 million tonnes of copper-zinc sulfide ore from a single lense of massive sulfide material from.  To have only a single lens is highly unusual for deposits in the IPB, thus further exploration around the old mine is high on the list for near-term future exploration tasks.  The Company has developed a ready-to-go VMS drill target at the Chança prospect, located in the NE corner of the license.

Ossa Morena Zone.  The Company controls a large exploration land package in the Ossa Morena Zone, adjacent to the north of the Pyrite Belt.  The Alvito permit, covering 303 square kilometers, was renewed for 30 months, and is prospective for iron oxide copper-gold systems. The Company has already identified more than 20 different mineral targets on the license. Previous partners on the project have funded approximately US$ 350,000 in exploration at Alvito.

Avrupa entered into an earn-in option agreement with OZ Minerals Ltd. to explore on the Alvito license (see news release of April 10, 2017).  Avrupa is the operator of the JV, and to date Avrupa has completed ground magnetics and gravity geophysical surveys, geological mapping, rock chip sampling, and drill targeting.  Recent rock chip sampling and mapping suggest new targets in several areas, particularly around the Mata and Monte do Outeiro targets where geochemical anomalies in gold, copper, bismuth, molybdenum, tungsten, lead, and zinc suggest the presence of a previously unsuspected, potentially mineralized, buried felsic intrusion.  A 15-hole, 2,100-meter drilling program is slated to start in mid-April 2018.

Previous regional soil sampling identified a 25-kilometer trend of copper anomalism within the license area.  In 2015, at the central Alcaçovas IOCG target, Avrupa drilled 29 shallow holes, totaling 356 meters, to collect sub-surface samples below the soil cover and through the leached bedrock zone. All of these holes were drilled only to 10 – 20 meters, or less, in depth. Twenty-five of the holes intercepted IOCG-style alteration and some visible copper mineralization.