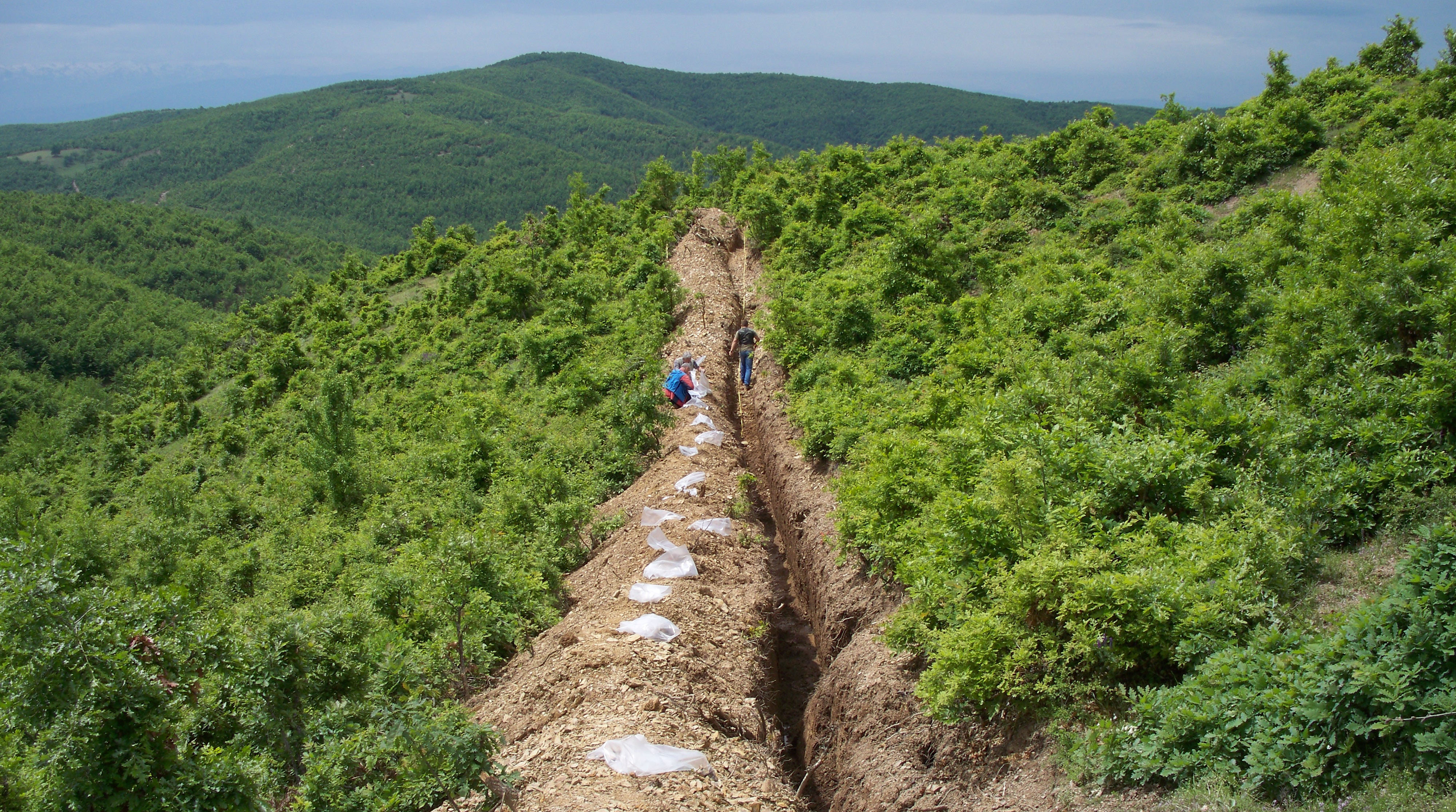 The Slivovo exploration license is located approximately 15 km southeast of the capital Prishtine, and just five kilometers from the Company’s core storage facility.  Avrupa geologists discovered an outcropping gossan zone, 200 meters long x 100 meters wide x 75 meters in elevation, near the village of Pester in late 2011, and immediately submitted an exploration permit application.  The Kosovo mining authority (ICMM) issued the license in June 2012, and it covers slightly more than 15.1 km2.  Work continued slowly around the license until the joint venture agreement with Byrnecut International Ltd. (BIL) commenced in April 2014.

Once the Slivovo JV became operational, the Avrupa geological team completed a program of trenching, first-pass and follow-up geological mapping and sampling, and drill targeting.  The first phase of drilling was completed during Q4 2014, highlighted by SLV004, SLV005, and SLV006 gold results.  Avrupa drilled eight holes, totaling 1,002 meters during this phase.

A generalized geological map of the Slivovo license and a more detailed geological map of the Slivovo Gossan zone, itself can be viewed below.  Field review and mapping of the Peshter Gossan during Q1-2 2015 has shown that the potential mineral target zone is larger than previously known.  Two drill holes completed during the Phase 2 program tested the eastern edge of the new eastern extension of the Peshter Gossan.  Results included both gold and base metal anomalism.

Avrupa announced the initial resource estimation on May 5, 2016 for the main Peshter Gossan Zone.  Avrupa currently holds a 2% NSR on the project.

All tonnages reported are dry metric tonnes.  Minor discrepancies may occur due to rounding to appropriate significant figures.  The information in this release that relates to the Estimation and Reporting of Mineral Resources has been compiled by Mr. Gary Giroux, M.Sc., P. Eng. ( BC).  Mr. Giroux, a consulting geological engineer employed by Giroux Consultants Ltd., is acting as the Qualified Person, as defined in NI 43-101, for the Slivovo mineralization inventory estimate.  He has over 40 years of experience in all stages of mineral exploration, development, and production.  Mr. Giroux specializes in computer applications in ore reserve estimation, and has consulted both nationally and internationally in this field.  He has authored many papers on geostatistics and ore reserve estimation, has practiced as a Geological Engineer since 1970, and has provided geostatistical services to the industry since 1976.  Both Mr. Giroux and Giroux Consultants Ltd. are independent of the Company under NI 43-101.

The 2017 drill program was originally planned for 5,670 meters. The program was designed to focus on five areas of interest. These were designated as potential target areas to significantly expand the known, near-deposit mineralization modeled by BIL as part of their detailed technical study completed at the end of 2016.The study fulfilled their 85% earn-in commitment in the Project. Avrupa is no longer contributing to the program and has been diluted to a 2% NSR.