Avrupa Minerals Ltd. (AVU:TSXV) is pleased to report on progress at the Sesmarias drilling program on the Alvalade license in the Pyrite Belt of south Portugal.  Drilling is now complete, with six holes drilled, totaling 2,498 meters.  The program continues to be highly successful, accomplishing goals of better technical understanding of the Sesmarias mineralizing system and significantly enlarging it.  Sampling of the drill core is ongoing, with full assay results expected by the end of February.

The drilling program successfully tested a new exploration model and concepts, with the following important results:

This self-funded drilling program is the seventh phase of drilling to be completed by Avrupa Minerals on the Alvalade license.  In addition to further targets in the immediate Sesmarias Project area, additional future drilling is anticipated for the Sesmarias-Lousal-Monte da Bela Vista District, as well as in other Avrupa-generated target areas with related Pyrite Belt-style massive sulfide targets and mineralization.  The map below serves as a reminder to the potential for further discovery in the Pyrite Belt mineral system located along the Neves Corvo Trend of mineralization on the Alvalade license. 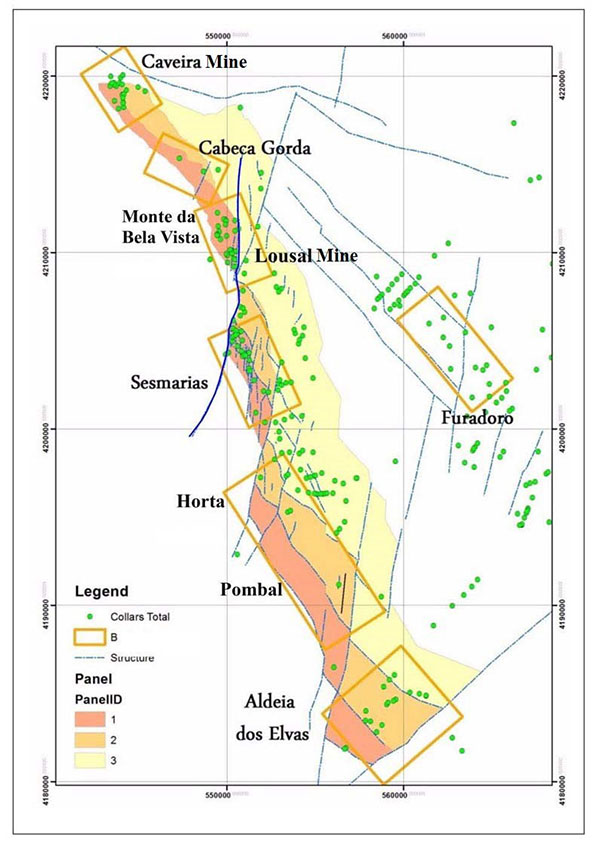 The recent work at the Sesmarias Project established a coherent picture of multiple, stacked lenses of massive sulfide mineralization, with at least one stockwork feeder zone. Some poorly defined faults exist which allow for the possibility of deeper targets, as well as potential, significant strike extension of the Sesmarias mineralization. 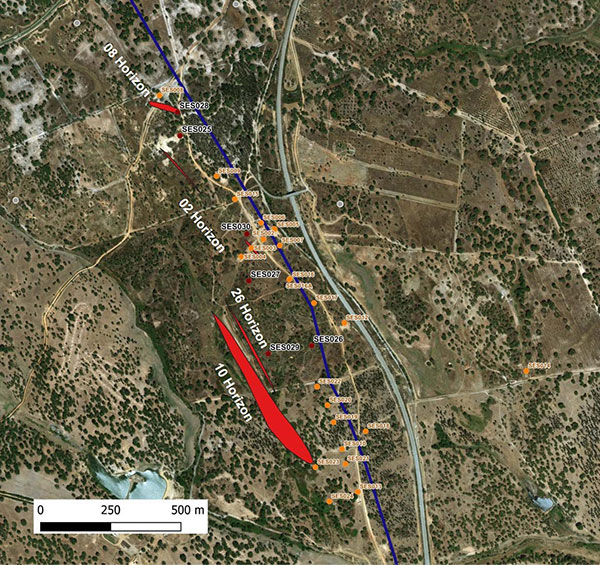 Figure 2.  Plan view of Sesmarias Project drilling.  AVU has drilled 30 holes into the target over a strike length of 1,500 meters.  Present understanding of the Sesmarias Mineral Zone suggests potential for further massive sulfide mineralization for at least an additional 800-1,000 meters north of SES008 and possibly 200-300 meters to the south of SES021.  Red shapes indicate map view location of known (to date) lenses and horizons, while the blue line represents the east side bounding fault. 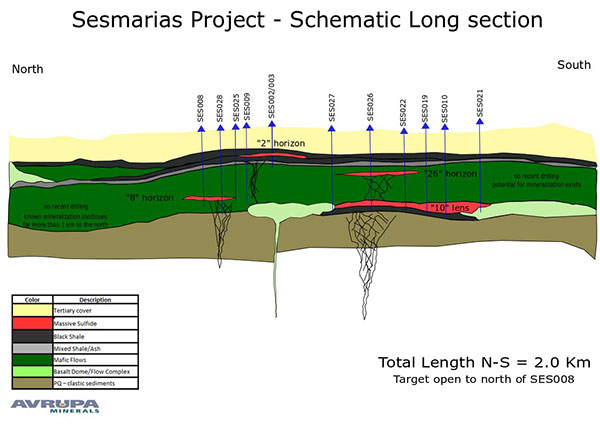 The success of the drilling program stemmed from “back-away” re-logging and re-interpretation of 38 Avrupa and pre-Avrupa historic drill holes in the Sesmarias Project area.  The objective of the re-logging campaign was to delineate mineralized target horizons in the general stratigraphy of the Volcano-Sedimentary (VS) section of rocks that host copper-zinc massive sulfide mineralization throughout the length of the Iberian Pyrite Belt in Portugal and Spain.  The re-logging campaign quickly established an increased strike length of the Sesmarias mineralized zone to at least 2.5 kilometers

The “back-away” re-interpretation of Sesmarias stratigraphy, utilizing quick logging of the historic drill holes and 3D modeling of all the new data, allowed the Avrupa team to predict the robustness of the “10” Lens, first noted in SES010, then subsequently intersected in SES019, SES021, and SES022.  Present-phase drilling, SES026 intersected nearly 30 meters of visual massive sulfide mineralization.  SES027, drilled 300 meters north of SES026, intersected stockwork sulfide mineralization and mafic intrusive rocks at the target depth, indicating the possible end of “10” Lens in the south sector of the Sesmarias system.  For now, strike length of the “10” Lens, from SES021 to SES026 is 600 meters.  Following is a 3D view of the “10” Lens. 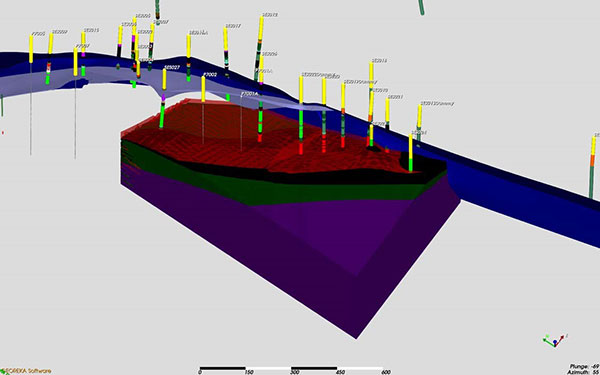 Figure 4.  Three-dimensional (3D) view of the “10” Horizon (solid red unit) at Sesmarias, SES021 on the south and SES027 on the north.  Previously, AVU interpreted the lens to be vertical, based on detailed, “close-up” logging of drill holes.  By re-logging the rock units/layers in a “back-away” package, or rock-unit mode, the AVU geological team established a more predictable, flat-lying stratigraphy that has enhanced the potential of large-scale mineralization at Sesmarias.  Re-interpretation of geological results in numerous pre-2018/19 drilling leads us to believe that some holes were collared on the wrong side of the bounding fault and under (or west of) the “10” Lens, thus missing the massive sulfide mineralization.

Furthermore, this “back-away” review of the core resulted in the determination that the overall orientation of the rock layers is far closer to horizontal than previously understood.  We found evidence of at least three, possibly four, potentially mineralized horizons hosting VMS-style copper-zinc sulfide mineralization.  Re-logging of 38 previous drill holes showed: